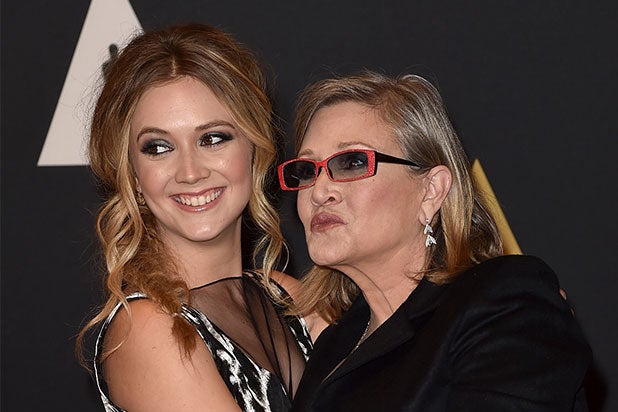 It’s been almost eight months since Carrie Fisher and Debbie Reynolds died, and now Fisher’s daughter Billie Lourd has vowed to continue their legacy — and become her own person.

“I’ve always kind of lived in their shadows, and now is the first time in my life when I get to own my life and stand on my own,” Lourd told Sarah Paulson in an interview for Town & Country. “I love being my mother’s daughter, and it’s something I always will be, but now I get to be just Billie.”

She added, “It’s a lot of pressure, because she had such an incredible legacy, and now I have to uphold that and make it evolve in my own way.”

Lourd has starred on Ryan Murphy’s “Scream Queens” but got her first major movie role in “Star Wars: The Force Awakens,” in which both she and Fisher appeared.

“The thing is, I was bizarrely comfortable on set,” Lourd said. “My mother would pull me aside and be like, ‘It’s weird that you’re so comfortable here. This is the most uncomfortable environment in the world. If you’re comfortable here, you should do this.'”

Fisher is best known for her role as Princess Leia in the “Star Wars” films — and Lourd said it was hard for her mother to play such an iconic character over and over again without feeling “oversexualized.”

“It’s tough, when you play an iconic character, to break away from it,” she explained. “You have to make sure you have a lot of variety, and make sure you choose roles that aren’t similar to others, or else you get pigeonholed as one thing. I don’t know if I would play a woman in space in a bikini. You also have to be careful about getting oversexualized, and that was hard for her.”

Fisher died at the age of 60 in December after she suffered a heart attack while on a flight from London to Los Angeles. Her mother, Debbie Reynolds, died one day after Fisher passed at the age of 84.

Paulson and Lourd remembered Fisher as someone who always found “the funny” in life and Paulson recalled the late actress telling her, “If you don’t find the funny, you’re doomed.”

“Oh, it’s so important,” Lourd responded. “If life’s not funny, then it’s just true — and that would be unacceptable. Even when she died, that was what got me through that whole thing. When Debbie died the next day, I could just picture her saying, ‘Well, she’s upstaging me once again, of course — she had to.'”