Comedian Billy Crystal told the New York Post in an interview published Thursday that he thinks the current state of comedy is a “minefield.”

“It’s becoming a minefield and I get it. I don’t like it. I understand it,” he said while promoting his new movie, “Here Today.”

“I just keep doing what I’m doing and that’s all you can do right now,” he added. “It’s a totally different world [now] and it doesn’t mean you have to like it.” Crystal’s comments were seemingly in response to so-called “cancel culture” — where public figures are torn down after publicly judged for transgressions, perceived or real.

Some entertainment and media figures have have come out swinging against it in recent months, publishing letters, quitting high-profile jobs and publicly worrying that foundational elements of modern culture will crumble because society is evolving. 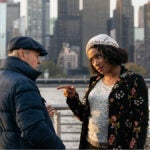 When asked to comment on the poorly rated Oscars held just a few weeks ago, Crystal dodged the question.

In his review of “Here Today,” TheWrap critic Alonso Duralde described the film — which Crystal co-wrote, directed, and stars in — as a “tale of a legendary comedy writer facing the grim realities of oncoming dementia.” Tiffany Haddish co-stars as, Duralde says, “a magical caregiver.”

Crystal told the Post that the relationship between his and Haddish’s characters is the most important part of the feature: “That’s something that we really need more of, the country, and that is empathy and that’s what I think is the beautiful part of this friendship. She gives up a chance for her career to move forward to take care of him. And I think that’s a beautiful thing.”