Epix on Wednesday unveiled a first look at “Billy the Kid,” an upcoming series about cowboy, gunslinger and American folk legend William H. Bonney, better known as Billy the Kid.

In the clip, Billy pulls up into a shadowy saloon on horseback. He dismounts and walks slowly up to the bartender, who asks if he wants a drink. Billy says, “Not yet” and slowly turns to look over his shoulder, giving a first look at his face. 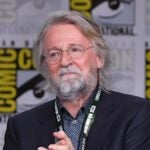 The season will feature eight hour-long episodes and will premiere in 2022. The epic romantic adventure series will follow William H. Bonney from his Irish roots, to his early days as a cowboy and gunslinger in the American frontier, to his pivotal role in the Lincoln County War and beyond.

It will also cover the his relationship with Jesse Evans, already a small-time criminal robbing stores and cattle rustling when they meet. Attracted to his wild and reckless character, Billy becomes his doppelganger of sorts and follows his lead into a life of crime.