Toronto Film Festival attendees were surprised this weekend to find director Mel Eslyn’s “Biosphere,” a humorous, semi-futuristic rumination on the last two men on Earth. A late addition to this year’s lineup, the film stars Mark Duplass as the U.S. president and Sterling K. Brown as an advisor, the planet’s sole living humans who are trapped in the biodome of the film’s title. The story sprang from Duplass’ idea of two guys arguing over the virtues of the video game “Mario Bros.,” according to Eslyn.

“They had me at ‘Mario Bros.,’ man,” Brown said. “I always wanted to warp, so I thought that doing this movie would pick up some trade secrets. It can be that simple sometimes.” To which Duplass said: “If the films sells well in Toronto, I’ll teach you how to warp.” (Warping, for the uninitiated, is a character’s instant movement from one location to another.)

Brown, Duplass, Eslyn and producer Zachary Drucker sat down with Steve Pond, TheWrap’s Executive Editor, Awards, at TheWrap and Shutterstock’s Interview and Portrait Studio at the Toronto Film Festival, where they chatted about “Biosphere” and why it was an enticing project for all involved.

Duplass, who also wrote the picture, said that “ideas come from me about 1/10th baked at best, and I rely on the smarter, more hard-working people around me to make them into things. It’s equal parts buddy comedy and equal parts something else.”

One of those people on whom Duplass relies is Eslyn, who has been working as a producer with Mark and his brother Jay Duplass for years on such projects as “The One I Love,” “Outside In” and “Lamb,” for which Eslyn won an Independent Spirit Award.

“I’ve wanted to make a feature since I was 7 years old, never wanted to produce…” she said, laughing. So what happened to change her mind about producing? “I happened!” Duplass interjected. 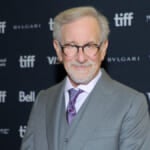 Also Read:
Steven Spielberg Credits the Pandemic for Finally Writing ‘The Fabelmans': ‘This Is Something I’ve Got to Get Out of Me Now’

Drucker, an Emmy-nominated producer of the docuseries “This is Me” and a former consultant on the series “Transparent” (which starred Jay Duplass), offered background on the debates that take place within the movie’s narrowed scope. “Over the past few years, especially at the end of the Trump era, there’s been such a reckoning with patriarchy and toxic masculinity. This seemed like the perfect microcosm of a story to unpack some of that.”

First-time collaborators Brown and Duplass might come off as argumentative by the movie’s set standards, but their description of working together is anything but. “It’s hard to have any relationship on camera that doesn’t exist to an extent off camera,” said Brown, who can currently be seen in theaters and on Peacock in the religious-fueled satire “Honk For Jesus. Save Your Soul.” “That was the joy of getting to know M.D., we knocked out…what was it, 9-10 pages [in one day]? It was fast and furious but because he’s a very knowable individual, we got a chance to have a good rapport.”

Duplass was equally effusive. “When you’re stuck in a dome, you want to be with Sterling because even though he’s a little smarter than you, in better shape than you, a little funnier, he makes you feel that you are so much better than him at that. After day three, I was like, ‘Why do I like this guy so fucking much?’ He makes me feel 120% of myself.”

“Awwwwwww, he made a black man blush!” Brown replied. “There’s a deep red hue that’s dying to come out.”

In terms of how they’d feel about being stuck together in a real-life apocalypse, no complaints from Brown: “Mark is the dude where, like, if the shit goes down, he’ll know where the food is.”

For the full conversation about “Biosphere,” click on the video above. 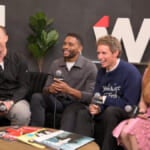