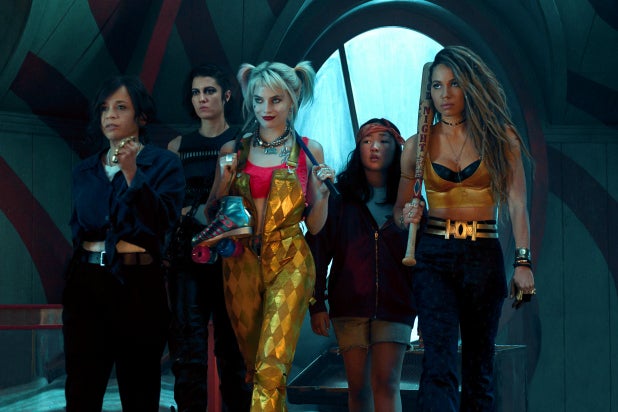 A thoughtful meditation on liberation, egg sandwiches and glitter bombs, “Birds of Prey” (subtitled “And the Fantabulous Emancipation of One Harley Quinn”) is a giddy treat of an R-rated comic-book movie, borrowing elements from inspirations as disparate as “9 to 5,” Bugs Bunny and Modesty Blaise to create an adventure that tweaks its genre familiarity with delightful bursts of anarchy and wit.

A sort-of sequel that soars far above “Suicide Squad,” this fresh follow-up wisely puts the spotlight on Harley Quinn (Margot Robbie) as she carves out (sometimes literally) a new life for herself in the aftermath of her breakup with the Joker. In discovering the power she’s always had to stand on her own two feet, and in freeing herself from trying to please the dysfunctional man in her life, she even manages to make some new female friends along the way.

They include hard-drinking lesbian Gotham City detective Renee Montoya (Rosie Perez), who patterns her patter after old cop shows; Dinah Lance, aka Black Canary (Jurnee Smollett-Bell), a singer whose voice can also become a powerful sonic boom; Helena Bertinelli, aka Huntress (Mary Elizabeth Winstead), once a Mafia princess but now an angel of vengeance seeking to murder the men who wiped out her entire family; and Cassandra Cain (Ella Jay Basco), a foster kid who finds herself in a world of hurt when she picks a diamond (the film’s shiny MacGuffin) from the wrong pocket.

That pocket belongs to Mr. Zsasz (a platinum-dyed Chris Messina), the brutal (and palindromic) enforcer for disgraced scion Roman Sionis (Ewan McGregor), who has turned his back on his privileged upbringing to become Gotham mob boss Black Mask. Screenwriter Christina Hodson (“Bumblebee”) skillfully weaves the five women’s relationship with Black Mask — be it as pursuer or victim — and jumps back and forth in time to put all of them in a place where they must band together to fend off not only him but also his army of goons.

(As presented by Hodson and director Cathy Yan, Gotham is part modern metropolis, but also — as in the old comics and the 1966 TV series — a home to volatile chemical plants, elaborate and abandoned amusement parks, and fog-shrouded, rotting piers.)

Also Read: 'Birds of Prey,' and the Box Office Power of One Harley Quinn

Yan (“Dead Pigs”), making her first foray into big-budget studio filmmaking, could teach others in the superhero biz a thing or two about introducing multiple new characters without letting the pace lag. The leads all get enough time and space to establish themselves (and their relationships to each other) in an unrushed way — in between several breathtaking action sequences, of course, which esteemed cinematographer Matthew Libatique (“Native Son,” “Venom”) shoots with gusto, whether on the streets or in a variety of visually striking interiors from production designer K.K. Barrett (“The Goldfinch”).

The film’s various elements work in wonderful concert to keep the momentum brisk but still grounded in a stylized version of human empathy, from Jay Cassidy and Evan Schiff’s whiz-bang editing to Daniel Pemberton’s consciously grandiose score. The cast makes each moment count: Robbie once again gives Harley a bravura physicality, this time aided by the outrageous costumes by Erin Benach (“A Star Is Born,” “The Neon Demon”), and she pinballs delightfully between the character’s extremes of boop-oop-a-doop sex kitten and experienced clinical psychiatrist.

Also Read: Can February's Box Office Hit New Heights Without a 'Black Panther' or a 'Deadpool'?

Winstead makes a vendetta-obsessed crossbow killer more fun that you might imagine; having spent her life training to be a deadly assassin, she’s more than a little socially awkward with the new peer group she’s suddenly amassed. And McGregor, playing a goosy sadist, hasn’t had this much fun on screen since “I Love You, Philip Morris.”

Yan keeps some tricky plates spinning: With the anarchic Quinn on the loose in a somewhat straightforward crime piece, “Birds of Prey” is required to jump from serious to silly and back again at a moment’s notice, and the director always has a firm grasp on the material. As for her female gaze, it’s most apparent when Roman humiliates a female guest at his nightclub; the camera pulls back discreetly, refusing to be his accomplice. (Here, the drooling close-ups are reserved for breakfast treats.)

When it comes to the film’s titular wonder women, however, we are firmly drawn in as they fight for their lives and for their own agency. And if we don’t get quite enough insight into Renee or Dinah or Cassandra, hey, that’s what sequels are for, and “Birds of Prey” left me wanting one, which is about the most anyone can hope for in a big-screen comics adaptation.