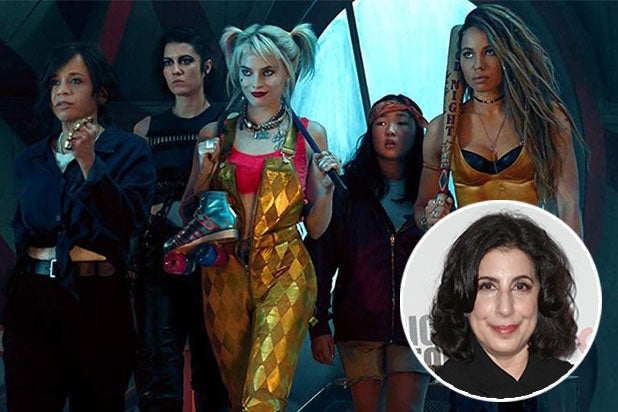 When Sue Kroll, whose executive producing credits include “A Star Is Born” and “Motherless Brooklyn,” stepped on to produce “Birds of Prey,” she understood the “big responsibility and expectation” that came with making a comic book movie based on a beloved female outlaw.

“We always wanted to make sure that we were making a movie that fans would love,” Kroll told TheWrap. “There is so much fan interaction with these big franchises, and they come with a big responsibility and expectation. Fans have expressed concerns over previous films in the universe, that they were too dark, and because we were representing characters that were unique — this was the first time we were seeing Huntress or Black Canary, they had never been in a movie — that came with responsibility. Making sure that everyone would be happy with what we put together but also creating balance that was broadly appealing for both men and women. That was the challenge: creatively to meet the objectives and still create a fun, entertaining, unique film. The DC world also promises scale and scope, and we really very fortunate with great stunt teams. And being purposeful and not earnest was a goal — not being on the nose but leaning into the fact hat we have the incredible women on the team that we had.”

Kroll explained that Margot Robbie, who first played Harley Quinn in David Ayer’s 2016 “Suicide Squad,” first had the idea for a standalone movie.

See Video: 'Birds of Prey' Director Cathy Yan Wants to See a Harley Quinn - Poison Ivy Film as Much as You Do

“She was thinking it’d be fun to do a girl gang movie and do an action film for DC, and ‘Suicide Squad’ was an interesting ensemble of characters in the world of DC that hadn’t been explored yet,” Kroll explained.

That’s when Robbie met screenwriter Christina Hodson, and the two started to work quietly on the script together. The idea was swirling for years, until President of DC Walter Hamada got his hands on it and loved it. Fast forward to present day, where the film is expected to open around $50 million and has received rave reviews from critics for Robbie’s performance, its fast-paced action and the fun and colorful visuals. Turns out, that was always the plan for the team behind “Birds of Prey.”

“That was always the intention — this entire story is told in the perspective of Harley,” Kroll said. “She is nuts, she is demented, but in the most charming and lovable way. The world was always imagined to Christina’s writing, which is very witty and very bright and colorful because Harley is that. It was also Cathy’s vision…. DC is allowing the vision of the filmmaker to be told. The idea was always to make it vivacious and fun and crazy.”

Robbie not only starred in the film but also produced through her production banner LuckyChap Entertainment, so the actress wore a lot of hats throughout the production of the film.

“Margot did her own stunts, she did learn to skate, but of course, the more dangerous aspects where she’s flipping onto the cars, that’s not Margot. Margot is tireless and has a desire to exceed expectations,” Kroll said.

“She never fails to impress and dazzle me,” Kroll added. “She’s learning the lines but was sitting in meetings and prep and talking about budgets and creative choices and then she’s going on to training and then going off to another meeting, then looking at dailies. She was able to switch gears. She really does it all — she’s an excellent producer, she’s very smart, she has wonderful creative ideas, and she’s amazing to work with.”

And Kroll hopes “Birds of Prey” won’t be the last comic book adaptation or superheroine project she’ll produce. “It’s not entirely up to me but it’s something even when I was an executive at Warner Bros., I just love the mythology, I love fairytales, and there are so many untold stories. If there is room in this world, I think it would be extremely fun. It’s creatively really freeing — there is so much to work with.”

Indeed, even “Birds of Prey” introduces us to a variety of new characters like Huntress, Black Canary, Cassandra Caine, Renee Montoya and, of course, Black Mask. Others that haven’t been explored yet are Batgirl, Poison Ivy (except for “Batman & Robin”), Lady Shiva — and many more.

Next up for Kroll is “The Six Billion Dollar Man,” starring Mark Wahlberg, and “Nemesis,” both of which were announced as part of her new shingle Kroll & Co. Entertainment in 2018.

On “Nemesis,” Kroll will only say one thing: “We’re busy at work.”