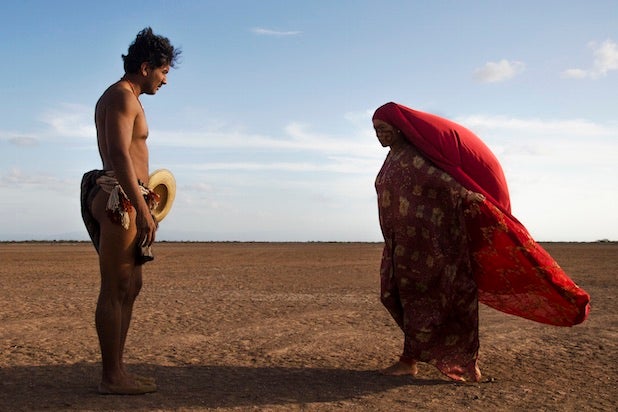 With his 2015 Directors’ Fortnight entry “Embrace of the Serpent,” Ciro Guerra delivered a minor miracle — a hypnotic adventure, as intellectually stimulating as it was visually accomplished, that collapsed time and blew open the brain.

The film’s awards life was equally remarkable: When it landed a Foreign Language Feature nomination, it became the first to ever represent Colombia at the Oscars, the rare example of an idiosyncratic vision forcing its way into a category that all too often opts to play it safe.

Guerra’s follow-up film, “Birds of Passage” — co-directed with his longtime producer and wife, Cristina Gallego, and debuting in the Directors Fortnight section of the 2018 Cannes Film Festival — works in a much more conventional register.

But that’s precisely the point: Where “Embrace of the Serpent” wanted to expand your mind, “Birds of Passage” wants to expand the gangster genre.

Like all family crime sagas, it spans decades, tracking the rise and fall of a tightly-knit clan, initially enriched and subsequently poisoned by their illicit enterprise. It’s the drug trade here — marijuana, to be precise — and the period runs from the carefree 1960s until blood soaked ’80s.

But if the story connects some familiar dots, it uses unfamiliar and heretofore unexplored color to do. The film focuses on the traditions, culture and language of Northern Colombia’s Wayuu people, using that “Narcos” structure as an effective point of entry for a rich portrait of an endangered way of life.

We first meet Raphayet (José Acosta) as a carefree coffee merchant, wet behind the ears and smitten by the beautiful Zaida (Natalia Reyes), who’s having the Wayuu equivalent of her debutante’s ball. Throwing us right into the festive mix, Gallego and Guerra allow the various fabrics, rituals and dances to spellbind with their beauty without ever exoticizing them.

Zaida’s beauty spellbinds, too, so much that Raphayet agrees to pay the outrageous dowry her family asks. He goes from hustling coffee to hustling some of the stronger stuff in order to pay it, eventually drawing in everyone in his orbit.

Call it greed, pot or the poisoned apple, the seeds of their entire family downfall have already been planted — though the unhurried film can sometimes be a tad slow in getting to that inevitable end-point. Still, that gives plenty of time to luxuriate in film’s eye-popping visuals, which forgo the trance-like black and white of “Embrace of the Serpent” to overwhelm the retina with every vivid color at its disposal.

Once the extended clan has become a family in the “Sopranos” sense of the term, they move into a stark white mansion in the middle of an arid desert plain, and the image of the house’s sharp modernist edges set against the vast natural landscape of the Guajira Peninsula, sort of sums up the entire film’s intent.