Biz Markie, the legendary rap pioneer known as “the clown prince of hip hop” and for his 1989 hit single “Just a Friend,” died Friday. He was 57.

“It is with profound sadness that we announce, this evening, with his wife Tara by his side, Hip Hop pioneer Biz Markie peacefully passed away,” the rapper’s family said in a statement. “We are grateful for the many calls and prayers of support that we have received during this difficult time. Biz created a legacy of artistry that will forever be celebrated by his industry peers and his beloved fans whose lives he was able to touch through music, spanning over 35 years. He leaves behind a wife, many family members and close friends who will miss his vibrant personality, constant jokes and frequent banter. We respectfully request privacy for his family as they mourn their loved one.”

His cause of death has not been made public, but the rapper, also known for cult hits like “The Vapors” and for numerous collaborations with other musicians, had been battling diabetes in recent years and had been hospitalized with complications from the illness in April 2020. 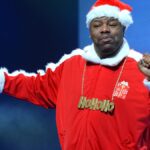 Also Read:
Biz Markie Remembered as ‘Legendary’ and ‘More Than Just a Friend’ by Peers and Fans

Born Marcel Theo Hall in 1964 in Manhattan, Biz Markie began rapping in the early 1980s and made his mark first as a member of the influential Juice Crew rap collective, which also included fellow legends Roxanne Shante, Big Daddy Kane, Kool G Rap, and Mr. Magic. He released his debut album, “Goin’ Off,” in 1988. The record featured the classic underground rap hits “Nobody Beats The Biz”, “Vapors”, and “Pickin’ Boogers” and established Markie’s comedic chops that led to his popular nickname.

Biz Markie reached his greatest period of fame with his second album, 1989’s “The Biz Never Sleeps,” which produced the late 80s classic “Just a Friend.” That single peaked at #9 on the Billboard Hot 100 and the album was certified gold in 1990. Released during a particularly innovative time in hip hop, the record is remembered as one of the most influential and enduring rap releases of its era.

Biz released three more full length albums — 1991’s “I Need a Haircut,” 1993’s “All Samples Cleared,” and 2003’s “Weekend Warrior.” But he also made an almost uncountable number of appearances with other rappers. Among them were numerous cameos on Beastie Boys albums and singles, as well as appearances on albums by Will Smith, Canabus, Len, Aquabats, and more.

He also occasionally acted, for instance in 2002’s “Men in Black II,” and years later in “Sharknado 2,” along with myriad appearances as DJ, including serving as Chris Rock’s opening act in 2009.

Watch the video for his classic 1988 single “Vapors,” below:

And to prove that Biz never lost a step during his legendary career, here’s his fantastic 2016 collaboration with The Avalanches: