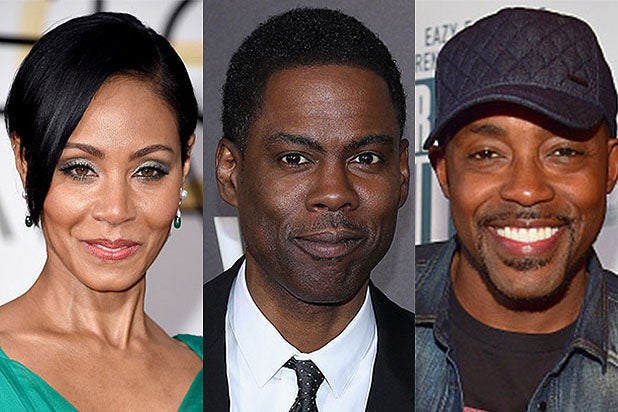 Jada Pinkett Smith has added her voice to the growing list of Hollywood stars criticizing the Oscars for a lack of diversity.

The actress, whose film credits include “Magic Mike XXL,” “Collateral” and “The Matrix Reloaded,” pondered on social media Saturday if people of color should participate in the Oscars at all.

“At the Oscars, people of color are always welcomed to give out awards, even entertain, but we are rarely recognized for our artistic accomplishments,” she wrote on Facebook and in a series of tweets. “Should people of color refrain from participating all together?”

Pinkett Smith, “Straight Outta Compton” producer Will Packer, Oscars host Chris Rock and Don Cheadle were just a few of the notable names to speak out about the lack of diversity among this year’s nominees, especially considering that this is the second straight year that only white actors were nominated.

One notable snub this year is Pinkett Smith’s husband, Will Smith, who won praise for his portrayal of Dr. Bennet Omalu in the NFL medical drama “Concussion.” Other critics slammed the Oscars for overlooking performances by Idris Elba in “Beasts of No Nation,” Michael B. Jordan in “Creed” and the cast of “Dope.”

Immediately after the nominations were announced on Thursday, the hashtag #OscarsSoWhite trended on social media, and the Academy was particularly criticized for snubbing “Straight Outta Compton,” which is nominated in the SAG Awards’ Best Ensemble category.

“To my Academy colleagues, WE HAVE TO DO BETTER. Period,” wrote Packer, who is an Academy member, on Facebook Friday.

Packer congratulated those who were nominated, but he lamented that several actors of color were overlooked.

“Who I REALLY want to applaud are some other actors, directors and producers who were at the top of their game this year,” he wrote. “A list that includes, but is not limited to, , , , John Boyega, Gugu Mbatha-Raw, Tessa Thompson, Audra McDonald, Adepero Oduye, Samuel L.Jackson, O’Shea Jackson Jr, Jason Mitchell, Corey Hawkins, F. Gary Gray and Ryan Coogler.”

Rock, who will host the Academy Awards next month, made light of the controversy. On Friday he tweeted a new Oscars promo along with the caption “The #Oscars. The White BET Awards.”

Don Cheadle joined the discussion Sunday by tweeting at Rock, saying he’ll be “parking cars” at the Hollywood & Highland complex the night of the ceremony.

The Academy Awards will air on Sunday, February 28, on ABC.

At the Oscars…people of color are always welcomed to give out awards…even entertain, (pt. 1)

But we are rarely recognized for our artistic accomplishments. Should people of color refrain from participating all together? (pt 2)

People can only treat us in the way in which we allow. With much respect in the midst of deep disappointment. J (pt 3)

@chrisrock Yo, Chris. Come check me out at #TheOscars this year. They got me parking cars on G level.