(We’re going to be very spoiler-light here in this post, so if you haven’t explored all the many, many permutations of “Black Mirror: Bandersnatch” yet and want to avoid any important details you should be safe reading this)

So if you’ve spent much time with “Black Mirror: Bandersnatch,” you might be stuck in a loop wondering if this thing will ever actually end. We, for example, had an initial runthrough that lasted over two hours as our choices caused the story to continuously fold back on itself as the Netflix Interactive Film kept funneling us down new paths.

But there are actual concrete endings to be discovered in this madness. And you’ll know them when you see them because you finally will stop getting options — the end credits will roll, and if you want to keep exploring you’ll have to start over from the very beginning of all of it with a completely fresh viewing.

This situation happens with two of the five main endings on “Bandersnatch,” at least if you’ve explored enough of the branching paths, and if you’re lucky or insanely smart you might just encounter another, secret bonus ending on top of that once the credits roll.

The crazy thing about this secret post-credits scene is that it would appear that nobody has yet figured out how to trigger it — though many people have actually encountered it incidentally. We count ourselves among those who stumbled upon it by accident, and by tracking our choices we have figured out a sequence of choices that will reliably trigger the secret scene. If you want to know how we did it, scroll down to the bottom of this post — we don’t want to clutter the page by putting the extremely long sequence here in the middle.

What this extra contains is downright fascinating. The scene itself is fairly mundane — we see Stefan (Fionn Whitehead) back on the same bus he took when he visited Tuckersoft for the first time at the beginning of “Bandersnatch.” This time, instead of choosing a tape to listen to while he rides, he pulls out a tape of his finished game, also called “Bandersnatch.”

The tape plays some…rather unpleasant sounds, and the scene ends. You can listen to it here. So that’s weird! For a minute nobody was sure what it meant, but then some enterprising individuals figured out that the sound is actually data, and the tape is for a ZX Spectrum computer — the computer that Stefan was making his game on.

So those enterprising individuals ran the audio through a ZX Spectrum emulator and the emulator spit out a QR code that looks like this: 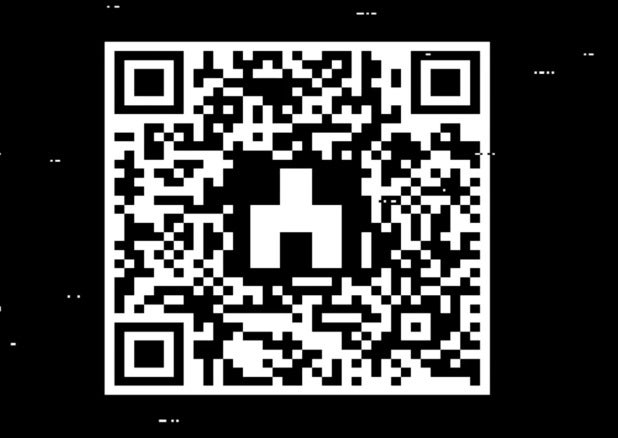 You can see the animation that the audio sparked in the emulator here.

Scanning the QR code will take you to a previously hidden page on what had previously been a mostly useless official site for Tuckersoft. This new portion of the site is very much not useless, showing off the covers of a bunch of other Tuckersoft games not seen in “Black Mirror: Bandersnatch,” which, like the “Nohzdyve” and “Metl Hedd” games, are all references to past “Black Mirror” episodes. There’s also individual pages focusing on “Nohzdyve,” Metl Hedd” and “Bandersnatch,” the last of which the site says “transformed interactive entertainment forever.”

The big Easter egg here, however, comes on the “Nohzdyve” page, on which you can actually download the game — though you’ll need a ZX Spectrum emulator to actually play it. But those are easy enough to find. We used the Spectacol Android app to load up the game on a Google Pixelbook and it worked fine. “Nohzdyve” is a fairly rudimentary arcade experience, but it’s certainly amusing enough for a free promotional game.

Also Read: 'Black Mirror' Creator Wants to Know How Many People Watched 'Bandersnatch' - but Only if it Beat 'Bird Box'

In any case, that’s the story of the madness of this surprising Easter egg that nobody seems to be entirely sure how they discovered. But I guess “Bandersnatch” wouldn’t be “Black Mirror” without some inscrutable extra stuff for the fans to dive into.

Here’s what we did to make the secret ending appear

Okay, so after watching “Bandersnatch” over and over again we eventually got the extra scene. We kept meticulous track of what decisions we made throughout that viewing and tried it a second time, and it worked again. And then we tried it on a completely different Netflix account and it still worked.

Now, we do not know what it is about this sequence of choices that makes the scene pop up. We just know that it seems to work. So if you’re hellbent on making the secret bonus ending scene happen on your TV/computer/mobile device, you can follow this path and it should trigger for you.

So, without further ado, here’s the exact sequence of choices we made that triggered the scene:

There are no bad episodes of ”Black Mirror,“ but only one of the new episodes is among the best