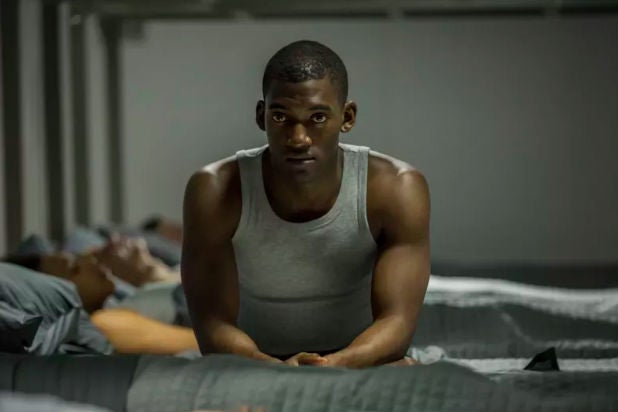 The fifth episode of the Netflix series’ third season joins “Full Metal Jacket” and “All Quiet on the Western Front” as one of the most powerful visual accounts of how war actually works. It powerfully makes the case that it’s much easier to kill enemies we don’t consider human.

It’s a phenomenon we’ve seen many times, in wars where we dehumanized our enemies by calling them racial slurs or accusing them of atrocities they may not have actually committed. In “Men Against Fire” the enemies are called “Roaches,” and soldiers are given implants that make these enemies — who are actually scared, fragile humans — appear to be vampiric monsters.

Late in the episode, a military psychologist played by Michael Kelly explains to a soldier nicknamed Stripe, played by Malachi Kirby, that one of the biggest problem in war is that so many combatants see their enemies’ humanity.

Here is his monologue:

“Humans. You know we give ourselves a bad rap, but we’re generally empathetic as a species. I mean, we don’t actually really want to kill each other. Which is a good thing. Until your future depends on wiping out the enemy … I don’t how much history you studied in school. Many years ago, I’m talking early 20th century, most soldiers didn’t even fire their weapons. Or if they did they would just aim over the heads of the enemies. They did it on purpose. British Army, World War I — the brigadier, he’d walk the line with a stick and he’d whack his men in order to get ‘em to shoot.

“Even in World War II, in a firefight, only 15, 20 percent of the men would pull the trigger. Fate of the world at stake, and only 15 percent open fire. Now what does that tell you? It tells me that that war would have been over a whole lot quicker if the military got its shit together. So we adapted. Better training, better conditioning. Then comes the Vietnam War, and the shooting percentage goes up t0 85. Lot of bullets flying. The kills are still low. Plus the guys who did get a kill, most of them came back messed up in the head.”

“Men Against Fire: The Problem of Battle Command,” is an influential book by Samuel Lyman Marshall, nicknamed “Slam,” a World War I veteran, newspaper reporter and military historian who said that in combat, no more than one in four men will generally fire their weapons. He said that this contention was based on interviews he conducted with soldiers immediately after combat in World War II.

Marshall proposed changes to increase the amount of shooting and killing, and according to a summary of his book, the ratio of fire more than doubled from World War II to the Korean War, just a few years later. Marshall later traveled to Israel, Beirut, the Congo, Vietnam and Nicaragua to write about war.

“He died in 1977, a legend among those who sought to understand men in battle,” says the introduction to the 2000 edition of “Men Against Fire.”

But others have cast doubt on the one-in-four statistic. The strongest case against it appears in a lengthy 1989 American Heritage article by Fredric Smoler that you can read in its entirety here. That article reads, in part:

“Unfortunately, the fruit of Marshall’s interviews, the astonishing insight, turns out to be a little too good to be true. In fact, it just may be that Samuel Lyman Marshall made the whole thing up.”

Also Read: 'Black Mirror' Fact Check: Can Hackers Watch You Through Your Camera?

Smoler said that Marshall was inconsistent in reporting the number of interviews he conducted, with them ranging from “approximately” 400 group interviews with infantry rifle companies, to exactly 603 interviews. Smoler also cites an argument that in a by-the-book divisional assault — he offers a very in-the-weeds account of how such assaults are carried out — it might be entirely possible that the vast majority of soldiers might have no orders or reason to fire. (Before you say, “Of course they would fire! It’s war!,” it’s worth clicking on the link to see why that may not be the case.)

Whatever the facts, what makes “Men Against Fire” — the book and the episode — so frightening is the idea that someone would make a cold calculation that war would be better if it were more ruthless, not less.

The argument, in essence, is that the longer a war drags on, the more painful it is. So better to rip off the Band-Aid — or in this case, kill more people quickly — than to let the misery persist.

There’s a utilitarian argument — you may have heard it in a philosophy class — that it was more ethical for President Truman to order the U.S. bombings of Hiroshima and Nagasaki to end World War II than it would have been to invade Japan.

“Truman heard estimates that put the [invasion] death toll in the range of 500,000 to 1,000,000 Allied casualties. Truman was also aware of the continuing slaughter of Japanese from ongoing non-nuclear bombing, which had already cost the Japanese some 100,000 lives,” says a PhilosophyNow post.

In this framing of the argument, the simple question is whether more people died in the bombing than would have died in an invasion. (The number of people who died by bomb and atomic fallout has been conservatively estimated at 225,000, but could be far higher.) We’re supposed to solve a hellish crisis with a math problem: Whichever approach results in the fewest total deaths is the most ethical approach.

One of the many upsetting things about these kinds of arguments is that we have no way of knowing who, if anyone, is right. We’re horrified and repulsed by the idea of Hiroshima and Nagasaki, but have no alternate history we can cite to prove the bombings caused more death and anguish than might have resulted from an invasion, or some other course of action.

The whole discussion feels disgusting. I feel gross even glancing toward the moral rabbit hole of counting actual lost lives against hypothetical deaths.

Part of what feels so sickening about the utilitarian framing is that the by-the-numbers approach ignores almost everything but numbers, and fails to assign a numerical value to the concept of humanity.

Using an atomic bomb doesn’t just kill actual people. It also creates a reality in which humans have dropped atomic bombs on each other, and the possibility that we might use an atomic bomb again. It makes us a people who have had and continue to have numbers-based debates about snuffing out human life on a mass scale.

What makes the “Black Mirror” episode so terrifying is that the technology that turns adversaries into “roaches” clearly isn’t being used for the first time. The technology serves as a symbol for almost any kind of weapon, from guns to atomic bombs to missiles to drones, that allow us to kill from greater physical and emotional distance.

It may have been introduced long before the episode takes place, to defeat opponents who struck first. It may have been used to end a war more quickly. There may have been sane, logical reasons for the technology to exist. It’s possible.

But it’s obvious that the “roaches” in the episode aren’t people who need to be killed. They’re largely unarmed and defenseless. The soldiers we meet on “Black Mirror” have slipped far, far down the slippery slope, and now they’re killing people they shouldn’t, enemies they don’t see as human, and becoming less human themselves.

The episode makes a powerful case that soldiers should be able to see the real faces of their supposed enemies, and make their own decisions about who deserves to die.