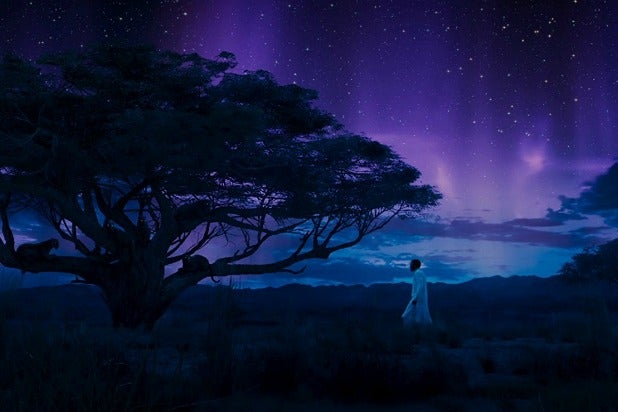 (Some spoilers ahead for Marvel’s “Black Panther”)

Outside of “Doctor Strange,” the Marvel Cinematic Universe has generally stuck with scifi rather than mysticism and magic, and now “Black Panther” is giving us another look at the spiritual side of the MCU by delving into the the reality of the religion of Wakanda.

Most notably, “Black Panther” shows moments in which T’Challa (Chadwick Boseman) visits what the Wakandans refer to as the “ancestral plane,” and even interacts with his ancestors as part of the process to become a superhero.

It all comes from the Heart-Shaped Herb, the strange Wakandan plant that, when ingested, gives the Black Panther their enhanced strength, speed, reflexes and durability. “Black Panther” includes a scene in which T’Challa has to take the herb as part of the ritual to instill the power of the Black Panther on him as king of Wakanda. Part of that ritual sees T’Challa briefly and loosely buried while he experiences a spiritual vision.

T’Challa’s vision shows him T’Chaka (John Kani), his father, and gives the pair a chance to talk about T’Challa’s future. The film suggests this isn’t just a hallucination on T’Challa’s part, either — he’s actually connected to his ancestors, previous Black Panthers, through the power of the heart-shaped herb. T’Challa seeks counsel from his father through the process, and learns other information from him. But there’s reason to believe that the final unrevealed Infinity Stone, the Soul Stone, may be what fuels this spiritual realm. And that’s because this “ancestral plane,” as presented, is a concept that’s original to the movie

“Black Panther” comics also carry a lot of that spirituality, rooted in the character’s African heritage and drawing from a variety of influences. How that spirituality is portrayed varies between writers and Black Panther’s iterations over the years, however. The idea that people who previously held the mantle of Black Panther are spiritually connected has been around since the 1980s, in which the Panther Spirit, which is essentially Wakanda’s god, is an active character. The spirit binds everyone who has served as the Black Panther (since the title isn’t just hereditary, but must be earned through tests of worthiness), and even abandons T’Challa because of his actions through part of the story. But ideas of reincarnation and spiritual connection have long been a part of the Black Panther character.

The “ancestral plane” is not a term used in the comics, but the closest comic book equivalent concept is probably the D’Jalia, the spiritual realm that has been an important part of the most recent run of “Black Panther” comics written by Ta-Nehisi Coates. In those stories,the D’Jalia is a spiritual plane that represents Wakanda’s collective memory. When T’Challa’s sister, Shuri, is killed in the comics, her soul travels through the astral plane and eventually to the D’Jalia. She trains there with spirits until T’Challa finds a way to rescue her soul and she’s revived.

What’s seen in “Black Panther,” a spiritual plane linked to the heart-shaped herb that binds ancestors together, might also have a larger link to the Marvel Cinematic Universe, as well. Each of the MCU films has been building toward the eventual massive crossover event “Avengers: Infinity War,” in which all the heroes in all the movies come together to deal with the threat of a supervillain called Thanos. The big deal with Thanos is that he’s after six super-powerful gems that helped create the universe, known as the Infinity Stones. Five of those stones have popped up in previous movies and are accounted for, but one still has never been shown: the Soul Stone.

Thanos’ driving force in “Infinity War,” as we know from the comics, is to gather all the stones together and use their power to control reality. We also know from trailers that some major stuff goes down in Wakanda in “Infinity War,” suggesting it’s a key locale to both the heroes and to Thanos.

Combine that with T’Challa’s visits to the ancestral plane after taking the Heart-Shaped Herb in “Black Panther,” and there’s a strong argument to be made that the Soul Stone might be in Wakanda, likely inside the vibranium meteor that crashed there thousands of years ago. It seems very possible that part of what makes the ancestral connection so strong between people who take on the mantle of Black Panther, which seems to go beyond religion and spirituality and isn’t mirrored anywhere else in the MCU, is the influence of an Infinity Stone.

That idea follows because of one of the key traits of the Soul Stone in the comics is that it captures souls — this afterlife that’s apparently centered around the Black Panther mantle, and thus also the consumption of the Heart-Shaped Herb, could mean that the ancestral plane and the Herb itself are products of the influence of the Soul Stone.

This is, however, just speculation for now, because “Black Panther” does not provide these answers. We’ll have to wait until “Avengers: Infinity War” comes out in a few months to find out if we’re right.