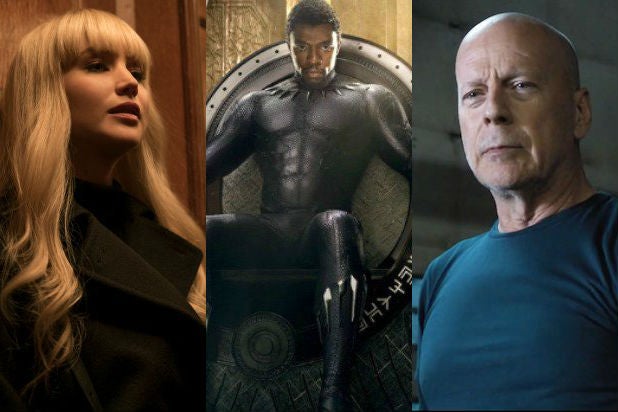 “Black Panther” is expected to put up another spectacular performance at the box office as it heads into its third weekend in release. Last weekend, the Marvel movie had the second-biggest second weekend in box office history with $112 million, and could perform the same feat for the third weekend if it reaches analysts’ most optimistic expectations of a $75 million weekend.

Not only would that be only a 33 percent drop for “Black Panther,” a $75 million frame would be a phenomenal achievement as the Academy Awards take place this Sunday. Oscar weekend has traditionally been viewed as a lull period for theaters, as ticket sales on Sunday drop while moviegoers stay home to watch the awards ceremony. But “Black Panther” has snatched the cultural conversation — along with thousands of movie screens — from the top Oscar contenders, so much so that the Oscars might not be much of a deterrent even though audience fave “Get Out” has the chance to win some major awards.

That leaves this weekend’s two releases, Fox/Chernin’s “Red Sparrow” and MGM’s “Death Wish,” to compete for the No. 2 spot on the charts. Trackers currently give the edge to “Red Sparrow,” which is projected to open in the low $20 million range from 3,050 screens. However, “Red Sparrow” is the more expensive of the two releases, with a reported budget of $69 million.

Based on the novel by Jason Matthews, “Red Sparrow” stars Jennifer Lawrence as Dominika Egorova, a Russian ballerina who suffers a gruesome, career-ending injury. With no direction in life, she is recruited into a secret spy agency where she undergoes training to seduce would-be targets into giving up information. But when she falls in love with CIA officer Nate Nash (Joel Edgerton), she considers becoming a double agent.

Francis Lawrence, who worked with Lawrence on three of the four “Hunger Games” films, is directing from a script by Justin Haythe. Jeremy Irons, Matthias Schoenaerts, Charlotte Rampling, Mary Louise-Parker, and Ciaran Hinds also star. Reviews for the film have been mixed to positive, with a current Rotten Tomatoes score of 65 percent.

“Death Wish” is expected to come in third this weekend, but will have a better start relative to its price tag with a projected opening in the high teens against a $30 million budget. MGM is releasing the film on 2,750 screens and is projecting a start in the mid teens. The film does not yet have a Rotten Tomatoes score.

The film is directed by Eli Roth and is a remake of the hit 1974 revenge thriller starring Charles Bronson who seeks to avenge his murdered wife and child. Bruce Willis takes over in the lead role, with Roth sharing writing credit with  Joe Carnahan and Brian Garfield. Vincent D’Onofrio and Dean Norris also star.