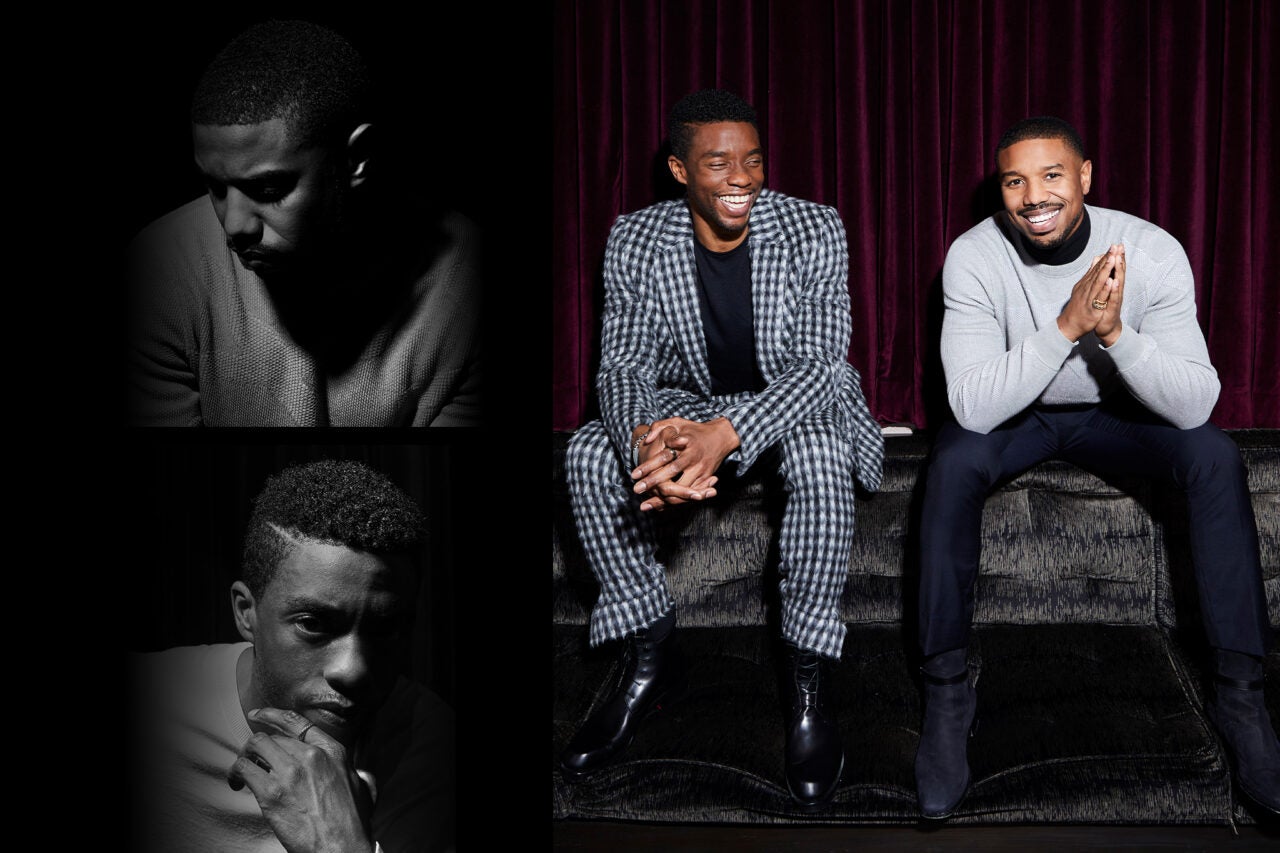 Chadwick Boseman was just as surprised as anyone when the smash commercial and critical success of “Black Panther” turned into serious Oscar buzz months after its release. “You don’t make a movie that comes out in February,” he said, “and automatically think about awards.”

No, you don’t. Since “The Silence of the Lambs” won the Best Picture Oscar after being released on Valentine’s Day 1991, only one other February release has even been nominated for the top award: “Get Out,” which turned the trick last year. And no comic-book movie or Marvel movie has done it in that time, either. But “Black Panther,” directed by Ryan Coogler, in short order became a critical favorite, a smash hit, a cultural landmark and, yes, a genuine awards contender.

Although the film is filled with strong female characters, at heart it is a showdown between Boseman as T’Challa, the leader of the secluded African nation of Wakanda and a man who has special powers as the Black Panther, and Michael B. Jordan as Erik Killmonger, T’Challa’s cousin, who was raised in the United States and wants to use Wakanda’s sophisticated weaponry to create a black uprising around the globe.

While the two actors have both appeared in previous Marvel movies — Boseman as Black Panther in “Captain America: Civil War,” Jordan as the Human Torch in “Fantastic Four” — they are better known for a string of exceptional performances in standout dramas: Boseman as Jackie Robinson in “42,” James Brown in “Get on Up” and Thurgood Marshall in “Marshall,” Jordan in the lead roles in Coogler’s “Fruitvale Station” and “Creed.” “Black Panther” marks the first time they’ve appeared on screen together — although they did have a close call on an unexpected show many years ago, which we got into in this conversation.

You’ve both done Marvel movies before this. What changes when you put Ryan Coogler behind the camera?

MICHAEL B. JORDAN It’s different for me, because I have such a personal relationship with him and such a connection with him over the years. But I feel like there’s a certain unapologetic nature to him. He’s extremely grounded and real. His filter for cheese is so strong that you only get realness out of every moment, you know? It has to be extremely authentic.

CHADWICK BOSEMAN Yep. And fundamentally, he has a lot of patience, and a very broad bandwidth for pressure. He’s willing to make the higher-ups feel uncomfortable to get something that he wants. There’s not a lot of people who can deal with that, who can say, “OK, I know what you’re saying, but here’s what we need to do right now.” ‘Cause he’s sure that this cave that he’s mining has gold or diamonds in there, and he’s not gonna stop just because you think we got it. He’s still using all the resources and all of the wisdom that people bring to the table, because there’s a lot of great people around who’ve been doing these jobs on a lot of movies. And he’s willing to soak up a lot of that and learn. But what he knows, he knows.

When the African American Film Critics gave “Black Panther” its top award, the citation said the movie “changed the culture and became a defining moment for black America.” Did you feel that?

JORDAN It’s so hard when you’re making a film to feel the impact. But when we were making it, we did know that we can’t mess this one up. We knew it had a lot riding on it. Not for the sake of attention or getting praise for the project, we just knew what it meant for a lot of people.

Even now, it’s early to really say what the impact is going to be. But I feel like it’s made an impact on representation, on kids able to see themselves on screen in a bigger-than-life, powerful type of way.

BOSEMAN That speaks to the work we put into it, but it also speaks to the void in Hollywood for all these years. This is an anomaly, you know what I’m saying? It’s not like things have not been building to this point before, because there’s a lot of great, quality work that’s been done over the years — and especially in the last few years, this has been building. But it speaks to the void, that over the years Hollywood has not put its resources behind movies like this.

You’ve both gotten great roles in the last few years. But did you feel that void when you were coming up, and did it limit the roles that were available to you?

BOSEMAN Yes. Like, yes. My manifesto has always been to do things that help break barriers in any way I can. How do I break a barrier with this role? What can I bring to the table that’s different? That’s my manifesto. As an African American artist, and filmmaker, actor, that’s my goal literally every time. And I feel blessed to be living in a time period where we can have a “Creed,” where we can have a “Black Panther,” where we can have a “Get Out.” We can have these things where you think, “Oh shoot, that’s fresh.” And it’s not completely changed, still — I have to say that.

JORDAN We’re celebrating the progress, but we still understand that we can’t bask in it. We have to keep pushing. For me growing up in the industry, I’ve been extremely blessed to play characters that no matter how stereotypical they were on the page, somehow when it got to the screen or on the TV set it somehow didn’t feel like it.

JORDAN [Laughs] This is the first time anyone has ever asked about that! We’ve done this so much, and you’re the guy, you’re the one.

BOSEMAN I knew it was gonna happen today!

JORDAN You did? Oh, man!

BOSEMAN I was like, “There’s no way in the world it’s not happening today.”

JORDAN That’s funny. [to Boseman] Hey, man, you had [the character] first. What’s up?

BOSEMAN [Laughs] It’s one of those things where you get a role, and you don’t really know. When I got it, I was like, “This is not part of my manifesto. This is not what I want to do. How can I make it work?” Because with a soap opera, they don’t always know where the character is going, so there’s possibly room for me to adjust this and change it and make it so, as you said, it’s stereotypical on the page but not on the screen. I remember thinking, “Do I say something to them about this, or do I just do it?” And I couldn’t just do it. I had to voice my opinions. And the good thing about it was, it changed it a little bit for [Jordan, who replaced him in the role]. They said, “You are too much trouble,” but they took my suggestions, or some of them. And for me, honestly that’s what this is about. 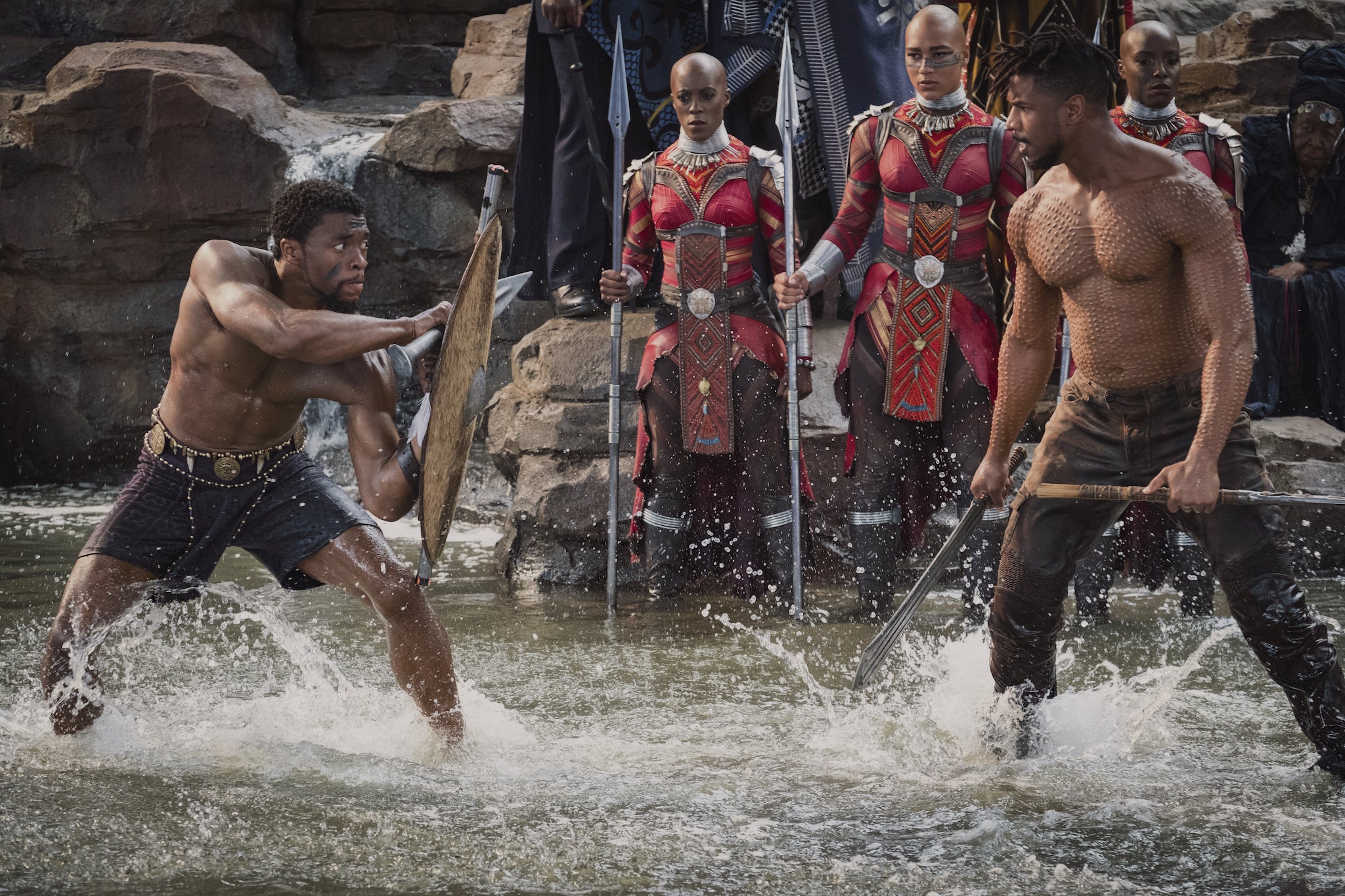 JORDAN It’s so wild to hear you say that. I’m younger than Chad, and I was coming into “All My Children” fresh off “The Wire” — wide open, still learning. I was playing this role not knowing that a lot of the things I was going through were because of what he’d already done for me.

It’s hard to speak in the moment about how things we do can affect other people. But this is a pure example, right here on the spot — we ain’t never talked about this before a day in our lives — to understand how what people do now can directly affect what other people do in the future. And the work that we’re doing on “Black Panther” is hopefully doing the same thing for the next group of actors that are coming up, just like our predecessors opened up doors and made things easier for us.

BOSEMAN The stories that I’ve heard from Jamie Foxx or Denzel Washington, you go, “Oh, shoot, I didn’t have to deal with that.” As an artist, you educate the people you work with — producers, casting directors — so when they deal with the next person it’s not the same preconceived notions, it’s not the same pitfalls. That was set up for us by Sidney Poitier and Denzel and Laurence Fishburne and Sam Jackson and Don Cheadle, and we’re still doing that same thing every time we do a film. And we’re educating our audiences. Audiences all have to be taught to see stuff in a different way. All of this is part of that broadening of people’s bandwidth.

Also Read: 'Black Panther' Stars Chadwick Boseman and Michael B Jordan Recall Playing the Same Role on 'All My Children'

Even beyond what it means for representation and opportunity in Hollywood, “Black Panther” is a movie that talks about sealing off the borders or interacting with the world. You can’t watch it and not think of what’s happening today politically.

JORDAN We shot it way before all of that. People try to connect the two, but in all honesty we created this before that was even a thing.

BOSEMAN It’s part of the comic book. In [writer] Christopher Priest’s versions of the comic book, he’s playing on the independence of South Africa, on [Nelson] Mandela’s decisions of whether he should keep the border open or close the border. Obviously, he decided to keep the borders open. So they had that same argument in Wakanda in the comic book, and it just so happened that this thing that was done years ago was still topical when we did the movie.

JORDAN Now, if people want to use that as motivation or a teaching tool or a lesson — “This is how things should be done as opposed to how they are being done” — so be it.

BOSEMAN It was written before Trump was ever president, but the decision to keep it in the movie is where the courage and the political thinking came in. Here’s the thing: When they do a Marvel movie, there is an expectation of having a certain amount of profit, whether that profit is going to be $5,000 or $1 billion.