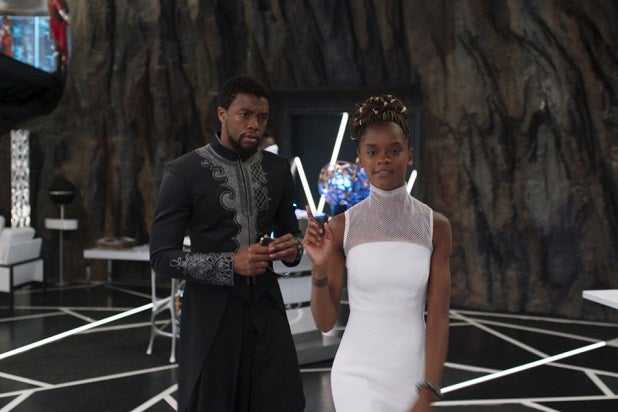 “Black Panther” has posted an estimated $65.7 million in its third weekend, ranking it No. 3 among all third-frames in box office history. And if tomorrow’s actual totals end up beating this estimate, “Black Panther” could take the No. 2 spot on that list from “Avatar,” which made $68.4 weekend back in 2010.

Even if it doesn’t, “Black Panther” has easily shattered the record for the biggest domestic gross on an Oscar weekend, showing once again how the 52-week release calendar is breaking conventional thought on box office performance. According to data from comScore, the previous Oscar weekend record was $40 million in 2010, held by Disney’s “Alice in Wonderland” remake.

Also Read: Sterling K Brown on Which Secret Was Harder to Keep: 'Black Panther' Role or Jack's Death on 'This Is Us'

“Black Panther” has now crossed the half-billion dollar mark in North America, ranking in the top 10 highest grossing domestic releases ever. Either today or tomorrow, it will pass the $504 million made by last year’s “Beauty and the Beast” remake for the No. 9 spot, and “The Dark Knight” will soon be next with $534 million.

Globally, “Black Panther” has made $56.2 million this weekend for a worldwide haul of $121 million and a global running total of $897.7 million. This week, the film will become the 33rd movie of all-time to make $1 billion worldwide, with a release in China still to come next weekend.

In second place is Fox/Chernin’s “Red Sparrow,” which is opening to a disappointing $17 million from 3,056 screens. With a $69 million budget, this Jennifer Lawrence spy thriller will need help from overseas to turn a solid profit. The film has made $26.5 million internationally for a $43.5 million global start.

“Red Sparrow” earns its hard R rating with gruesome violence and unapologetic sexuality that may have turned off some moviegoers and made commercial success for this film a challenge. Critical reception for the film has been mixed with a 51 percent score on Rotten Tomatoes, though audience reception has been a little better with a B on CinemaScore.

In third is MGM’s “Death Wish,” Eli Roth’s remake of the 1974 revenge thriller with Bruce Willis playing the lead made famous by Charles Bronson. The film has posted a $13 million opening from 2,847 screens, slightly below the mid-to-high teens projection set by trackers. But “Death Wish” is in a better position to turn a profit, as it is the cheaper of this weekend’s releases with a $30 million budget.

“Death Wish” follows in the trend of macho action films like “American Assassin” and “Den of Thieves,” which are made relatively cheap for $25-40 million and are able to produce a solid return for their studios. Though it was panned by critics with a 15 percent RT score, “Death Wish” earned a B+ on CinemaScore and should bring in a strong return, as the cult following for both Roth and the original “Death Wish” have given this film a built-in audience.

Holdovers complete the top five, as WB/New Line’s “Game Night” has gained some good word of mouth to help it post $10.7 million in its second weekend, just a 37 percent drop from its $17 million opening. “Peter Rabbit” continues to be a good draw for family audiences, adding $10 million to bring its worldwide total to $100 million to date.

In sixth is Paramount’s “Annihilation,” which only has a 10-day total of $20.6 million after posting $5.5 million in its second weekend, a 50 percent drop from its $11 million start. In seventh is “Jumanji: Welcome to the Jungle,” which added $4.5 million in its 11th weekend and is nearing $400 million domestic with a current total of $393 million.