“Black Panther” star Letitia Wright, who plays tech genius (and T’Challa’s sister) Shuri in the Marvel Cinematic Universe, had fans upset on Thursday night after she shared an antivaxxer video on Twitter and then began tweeting in apparent support of the position.

We’ve embedded some of those tweets as screenshots below. See them on Twitter here, and here. 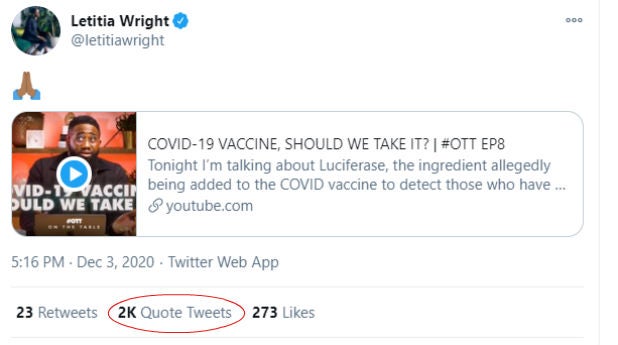 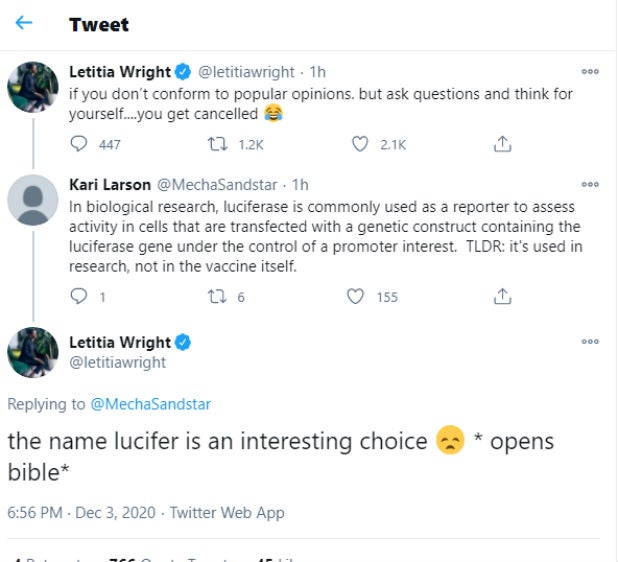 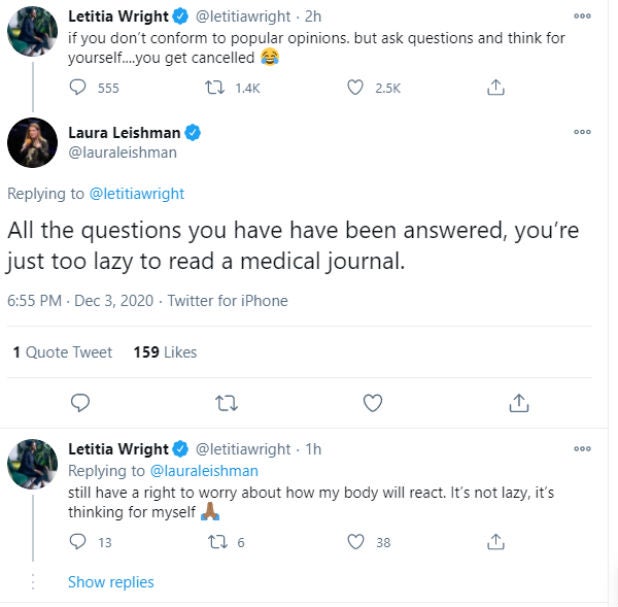 For those who don’t know, “Antivaxxer” is a portmanteau describing people who adhere to a broad range of unfounded conspiracy theories about vaccinations (anti-vaccine). The movement, which grew primarily thanks to a thoroughly debunked scientific fraud that falsely asserted vaccination played a role in autism and also incorporates other false claims, has gained widespread support over the last 20 years with extremely dangerous consequences.

For instance, the return of deadly diseases previously believed to be largely eliminated has been directly linked to a rise in antivaxxer adherents, including multiple outbreaks of measles, tetanus, and even polio. In fact, there was a 30% increase in measles worldwide in 2019, which health experts directly attribute to growing opposition to vaccines.

In short, the growing popularity of anti-vaccination conspiracy theories is literally killing people. Which probably explains why so many of Wright’s fans took issue when she shared a video attempting to discourage people from taking COVID-19 vaccines, and then continued to defend the position in disagreements about it with her followers.

Wright’s initial tweet was quickly ratio’d — i.e., when replies to a tweet vastly outnumber likes or retweets, almost always an indicator the majority of people object to what was said — as people flocked to essentially beg her to recant. Many pointed out that the video she shared also included transphobic and climate denialist content. Other simply pointed out the irresponsibility of encouraging people not to get vaccinated in the middle of a plague. And activist and author Mikki Kendall explained in a lengthy thread her views on the dangers of conspiracy theories and the people who peddle them, which we’ve embedded in full below.

But a great many just expressed their disappointment through jokes and mockery.

Wright frequently responded to people, but curiously she also occasionally liked tweets calling for her to be fired or for “Black Panther 2” to be canceled.

Representatives for Marvel and Wright didn’t immediately respond to requests for comment from TheWrap. Wright’s Marvel Cinematic Universe coworker Don Cheadle initially quote tweeted her saying “Bye Letitia,” a pun on the phrase “Bye, Felicia” usually used to dismiss unpleasant people. However in a series of follow up tweets Cheadle insisted he meant no ill will and considers Wright “my lil sis.”

Why is Shuri trying to kill her career lol

All right. This is the stock answer for celebrities who don’t care about the harm and misinformation theyre spreading. Lost cause. https://t.co/mU3foUBFEk

if you told me. that in 2020. SHURI would be arguing under my tweet that a pandemic vaccine is demonic.

The fact that someone who plays a scientist/doctor in one of the highest grossing films of all time is an anti-vaxxer is camp!! https://t.co/NWfGSgzdsU

There's a lot of profit in conspiracy theories which is one of the reasons so many con artists use them. They're dangerous precisely because they rely on twisting an ugly history. Virologists and epidemiologists are generally outside the public eye so they don't build trust well

But (and this is the thing that matters) while racial bias has obviously not been eradicated, much better laws and protective guidelines are in place now than at any point in human history. And the Modern vaccine has a great success rate https://t.co/a4pmGAJn7Z

And listen, pharma companies have only themselves to blame for a lot of what we're seeing now. There's a great piece about this from last year that is focused on anti vaxxers in general but it applies now too https://t.co/QDaB9Mfy41