“Black Panther: Wakanda Forever” opens with its characters dressed entirely in white, presenting a stark and symbolic contrast to its blockbuster predecessor that depicted Africa in the brightest of colors.

Angela Bassett solemnly walks down the dirt paths of Wakanda as Queen Ramonda, wearing a white version of her signature isicholo that is almost identical to the one her character wore on the big screen four years ago for the coronation of the son whom she is now burying.

The camera then shifts to Letitia Wright’s Shuri, the princess and prodigy who was once chastised for her tendency to “scoff at tradition,” now wearing a white funeral shroud and tusk earrings while holding the mask of the fallen Black Panther, King T’Challa.

This is how director Ryan Coogler opens this dignified, somber tribute to Chadwick Boseman, with a funeral on a bright day in Marvel’s afrofuturist kingdom, with the film’s cast and hundreds of performers clothed in bright costumes designed by the legendary Oscar winner Ruth Carter.

“We wanted this scene to feel celebratory despite the sadness. For the Wakandans, this is a ceremony of T’Challa’s ascension,” Carter told TheWrap.

Long before becoming the first Black winner of the Academy Award for Best Costume Design for her work on the first “Black Panther,” Carter had cemented herself as one of the greatest designers in Hollywood history thanks to decades of collaboration with Spike Lee as well as work on films like Steven Spielberg’s “Amistad,” John Singleton’s “Shaft” and Ava DuVernay’s “Selma.”

But it has been through Wakanda that Carter has inspired awe in millions worldwide, fusing clothing designs from across Africa to create the distinct outfits of the different tribes seen in director Ryan Coogler’s Oscar-winning 2018 film and the new sequel released this weekend. Through countless hours of research, Coogler, Carter and the rest of the film’s production design team crafted a lore bible for Wakanda, serving as a guide for the costume designer as she and her team created outfits for T’Challa, Shuri, the Dora Milaje and hundreds of extras.

So when it came time to design the costumes for T’Challa’s funeral, Carter leaned on the research she had already done for the first film and built on it by speaking with African historians about funeral traditions in various regions of Africa. Carter was told that in many regions of the continent, the colors most commonly worn for funerals are white and red. As she compared notes with Coogler, the director decided early on that white would be best for the film, providing an immediate, stark contrast from the bright, multicolored outfits that the Wakandans regularly wear and the black and purple color base that T’Challa wore as the Black Panther. 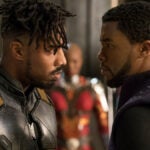 “When people watch the procession at home and are able to pause it, they will be able to see the different tribes of Africa coming together through the different costumes,” Carter said. “You can see the Zulu, the Tuareg of Mali and all the areas of Africa together as a group.”

Carter took extra care with the costumes for the scene’s African actors and performers like the ones who play the tribe elders who serve as T’Challa and Ramonda’s inner council. Connie Chiume, who plays the leader of the Mining Tribe, wears a Himba drape done in white while Baaba Maal, the Senegalese singer whose voice can be heard in the funeral music composed by Ludwig Goransson, wears a white version of garb commonly seen in West Africa.

“I’m running from person to person, wrapping turbans, adjusting outfits, making sure everything is in place,” she said. “It makes it hard for me to watch a film the first time out because we are so intentional about how each person is represented, how each person celebrates their culture. It’s the grooming that makes the authenticity come alive because when clothes aren’t respected in the proper way, it takes away from the magic of learning about that person and their tribe and culture.”