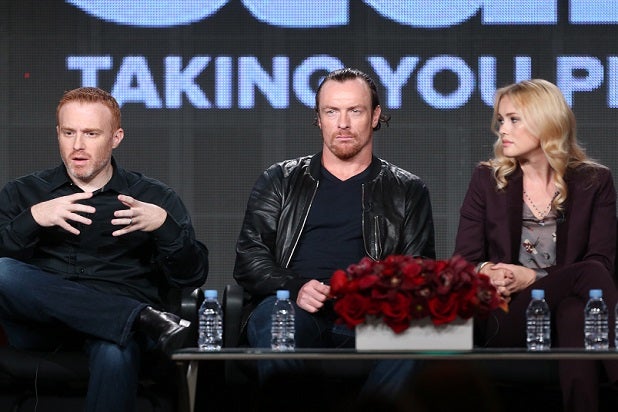 Starz is preparing to hit the high seas and do some plundering with its upcoming epic, Michael Bay-produced series “Black Sails,” a small-screen sequel to the classic pirate’s tale “Treasure Island.”

Friday at the Television Critics Association press tour in Pasadena, Calif., executive producer Jonathan Steinberg tackled the question of, “Why do a story about pirates?” (Besides the fact that pirates are awesome, of course.)

The short answer? Because Steinberg had never seen a pirate story quite like this before.

“I think the unifying principle, if there is one, is I spend a lot of time thinking about things that people aren’t doing and where there are stories that feel like they want to be a show, that feels like it wants to be a world to be explored. This is one that’s been stuck in my head for a long time,” Steinberg told the assembled reporters during the “Black Sails” panel. “No one’s dug into this world, deep into the bedrock of it. Into the reality of what it was like to wake up in the morning and know that this was your life — that if you were going to survive and you were going to eat, you would need to take from somebody. It’s a very different tone than any other pirate story I’d ever heard.”

“Black Sails,” Steinberg suggested, would delve into the pirates’ life in a similar game-changing way that “The Wire” delved into police stations and “The Sopranos” delved into mob families.

Of course, this being a Starz series, there will be sex a-plenty, and cast member Hannah New, who plays Eleanor Guthrie on the series, offered her take on the carnal shenanigans in “Black Sails.”

“I think it’s really interesting because it’s a world where sexuality and boundaries are completely broken down. So to play a young woman who doesn’t have those kind of social restrictions put on her, who’s free to use her sexuality … is fabulous, and a great opportunity to actress.”

Steinberg stressed, however, that there was no “more sexier” mandate from the network.