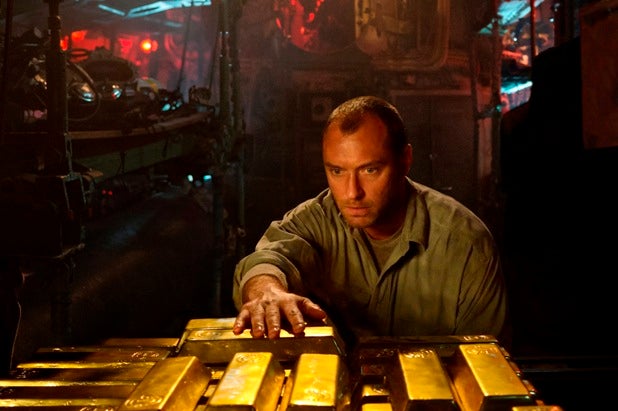 Claustrophobic, tense and playing out as a global economy variation on “The Treasure of the Sierra Madre” set in the cold, crushing depths of the ocean, director Kevin MacDonald‘s “Black Sea” will have any thrillseekers in the theater clutching their armrest and shivering with imagined terrors.

Jude Law, with a short growth of stubble and a low growl of an accent, stars as Robinson, a Navy veteran who, in his first scene, is being fired after over a decade with a shipping company. Drinks with other similarly-discharged old coworkers lead to a discussion of rumors, legends and tales about a sunken German U-Boat, laden with Russian gold that was sent by Stalin to Hitler in the 1940s as a last-ditch attempt to appease the Führer right before the Nazis invaded the USSR.

Surveying his grim prospects (“They want me flippin’ burgers,” he growls at one point), Robinson hatches a plan to find a financier, acquire an old sub, assemble a English-Russian team of mariners, divers and experts, and sneak under the Russian fleet to make off with the wartime treasure.

As other films have taught us, Robinson’s challenge isn’t in enduring the quest for the treasure as much as surviving what will happen if he acquires it. The expedition’s backer sends along a crony, Daniels (Scoot McNairy, essentially channeling Paul Reiser in “Aliens”), and Robinson shanghais young Tobin (Bobby Schoenfeld) into the crew, but grizzled veterans like short-tempered diver Fraser (Ben Mendelsohn, “Exodus: Gods and Kings”) and the lanky, smiling Reynolds (Michael Smiley, “A Field in England,” “Black Mirror”) make up the rest of the group.

As soon as Robinson promises all parties equal shares, though, things start getting tense; once at the bottom of the ocean in a rusty surplus Russian sub, they go bad swiftly and all at once. From his beginnings as a documentarian, Macdonald has always been a director whose films, from ‘The Last King of Scotland” to “How I Live Now,” are shaped as much by his intelligence as by the camera lens. Written by Dennis Kelly (the soon-to-be-remade “Utopia”), “Black Sea” stays not only surprising but also tough, with Law’s Robinson becoming more and more obsessed with the prize as the risks become greater and greater.

A film like this could be have easily been torpedoed (sorry) by skimpy or shoddy technical work, but Macdonald’s crew delivers excellence. The sound design and editing — so important in the quiet depths of the cruel ocean — is phenomenal, with cinematographer Christopher Ross nicely meshing the cramped, red-lit interiors of the sub with the effects team’s shots of the colossal sub surrounded by an infinitely larger ocean.

Technique is one thing, and feeling another; let it also be noted that all the performers are excellent here as well. Whether it’s the new faces and character actors among the Russian crew or I-know-that-guy veterans like Mendelsohn, McNairy and Smiley, all the characters convey a sense of being under pressure and aware of the calculus that more dead crew members mean a bigger payout to the survivors.

It would be one thing if “Black Sea” just delivered thrills and calamities and challenges to survive; fortunately, Macdonald lets us into the fears below the fears, the insecurities behind the concerns of immediate peril. There’s a lot of heavy-metal action in “Black Sea,” but it’s the frail flesh-and-blood mortals inside the steel shell of their sub that makes what happens matter. Gripping, smart and genuinely thrilling, “Black Sea” elevates itself above most other thrillers by how wisely and well it brings you down to the depths alongside its crew.