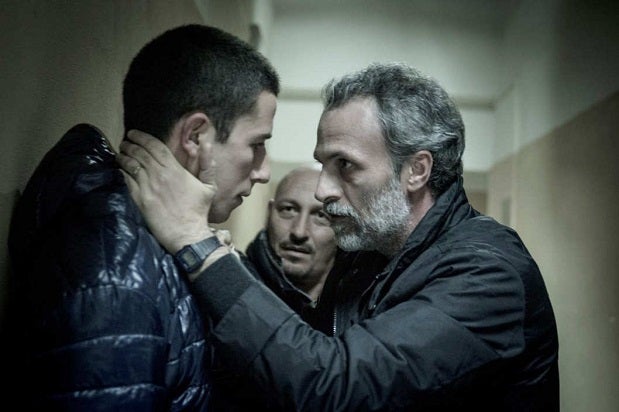 There are no horses’ heads left in people’s beds in director and co-screenwriter Francesco Munzi’s Italian mafia saga “Black Souls” (“Anime Neri”); the camera never follows our made-man protagonists as they glide through the kitchen of a club to take a front-row seat earned through their criminal swagger.

Instead, Munzi’s film (adapted from Gioacchino Criaco’s novel of the same name) chooses to unfold far from cities and nightclubs and the usual locations for organized-crime stories, and the choice is to the film’s benefit. Most of the film takes place in the remote region of Calabria, where the family feuds and long-simmering resentments between local crime families come to a slow, searing boil that becomes a crucible for character.

It’s a tale of three sons and a dead father, at heart: After their father was cut down by rival gangs, brothers Luigi (Marco Leonardi) and Rocco (Peppino Mazzotta) have grown into success — international drug smuggling, construction, and a host of other money-making activities they tend to from a home base in Milan. Oldest brother Luciano (Fabrizio Ferracane) chose instead to raise goats and his family in their small hometown of Africo and wants no part of the profits and posturing that flow between local crime families.

Not coincidentally, it’s Luciano’s son Leo (Giuseppe Furno) who wants more out of life, or to prove his manhood: How you going to keep ‘em down on the goat farm after they’ve seen the bright lights of Milan, especially as fueled by what seems like all the drugs and money in the world?

The film’s world is visually stunning, thanks to cinematographer Vladan Radovic’s ability to capture the bustling expanse of a sprawling metropolis or the stark, raw features of the Calabrian countryside; we come to see these characters’ worlds as they do, and that informs our understanding. Editor Cristiano Travaglioli (“Il Divo,” “The Great Beauty”) works superbly with Munzi’s direction; this is a film where the tension comes in the long quiet before and after the short, loud moments of violence.

Leo’s idiotic show of bravado in the name of flying the family colors involves shooting up a low-rent bar owned by the family’s long-standing enemies. It’s a small provocation; then again, the local fields and hills are full of graves containing people guilty of similar and seemingly minor acts. Munzi creates a vision of revenge and warped manhood intertwined and running deep beneath the surface, a twisted mass of roots and wrongs that can be nourished only with blood.

The performers also excel — no small feat in a film made up of silences and long glances, or wordless moments shaped by the camerawork and Giuliano Taviani’s broad, sweeping score. Leonardo’s Luigi is a happy thug; Mazzotta’s Rocco a more refined kind of criminal; Ferracane’s Luciano twists and turns in the shifting wind, as though hanging from a noose, until he lashes out. And as Leo, Giuseppe Furno achieves a small, near-silent miracle; Leo’s foolhardy actions and idiotic bravado are excruciating to watch and yet utterly understandable.

“Black Souls” isn’t much interested in gunfights or chase scenes; there’s a slow, calm sense of business being done and lives being lived with occasional breaks for murder and retaliation. This is the soil from which every Mafia story springs — these petty squabbles, these crimes and murders. By taking the mob film back to its basics of land, family and death, Munzi’s film strips away artifice, cliche and gun-in-fist glamor to make a story of family and fury that burns cold and slow.