Marvel Studios’ “Black Widow” is finally here, with a joke that some viewers may find questionable. Before fleeing to your keyboards, consider the line’s place within the context of the patriarchy-fighting superhero flick.

If a certain “boomer”-esque joke felt out-of-place in the girl power-fueled action romp, it was the filmmakers’ intent, as explained by director Cate Shortland and screenwriter Eric Pearson in an interview with Elle magazine published Friday.

In case you have yet to see Scarlett Johansson’s official signoff from the MCU, we’ll fill you in. At one point, David Harbour’s character, Alexei, makes a misogynistic comment to Natasha (Johansson) and Yelena (Florence Pugh) regarding their moodiness. If you are someone with a period then you know where this is headed.

“Scarlett, Florence, and I were like, ‘Are you serious?’ We were so angry with him,” Shortland recalled to Elle, referring to Pearson, a longtime Marvel scribe.

But Pearson says he knew the joke was offensive. In fact, that was the exact reason he included it. He explained that it was a subtle way to establish Harbour’s character as the sort of “lame” thing an old-school guy like Alexei would say.

“Let’s get him back with his two girls, who’ve just gone through this great deal of effort to get into the situation, and let’s just have him ruin it immediately.” Pearson said, “That’s what I was thinking.”

Shortland admitted that she eventually came around to the iffy line. 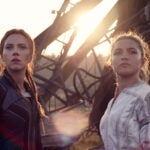 “Instead of cutting it out, we decided to answer it, and I think that’s the strength of the film,” she said. “We tried to address it with humor.”

According to Shortland, the scene ultimately serves the film’s broader theme of women reclaiming agency in a man’s world, even if it may induce a few eye rolls in the moment.

“The idea of women being subjugated, the idea of women’s reproductive power being taken away—we wanted to poke fun at that as women and to say, ‘OK, you try and take our power, but we’re not going to take this lying down, and we’re going to make fun of it so that we don’t become victims.’”

“Black Widow” is now in theaters and streaming on Disney+.