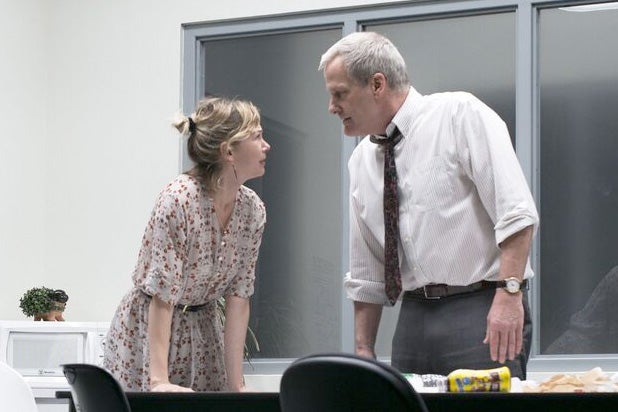 The new Broadway production of David Harrower’s “Blackbird,” which opened Thursday at the Belasco Theatre, puts us in the very uncomfortable position of looking back at the affair a middle-aged man had with a 12-year-old girl 15 years ago.

Of course, “affair” is not the right word. He sexually abused her. But you identify. The uncomfortable part is that you sometimes identify with him, too.

This identification with both characters was more evident in 2007 when the play had its New York debut at Off Broadway’s Manhattan Theatre Club. Jeff Daniels starred and Joe Mantello directed, and they return for this current revival. The big difference is Michelle Williams, taking over for Alison Pill as the girl, who is now a woman but trapped in the prison of her impossible past.

Harrower carefully calibrates his 90-minute drama, which takes place in real time. About every 10 minutes, he shifts the ground under these two characters’ very unstable footing. For the first 10 minutes, we’re not even sure why Una has shown up at Ray’s office to confront him after all these years. The sexual-abuse revelation is a stunner.

But Ray can explain. Ray, in fact, is always explaining, which is why the ground keeps shifting under their feet. He wants to be understood. The marvel of Daniels’ performance then and now is that his Ray could just be a big liar. Una may not have been his only victim. He may or may not have abandoned her during a weekend tryst. He may continue to be a child molester even though he’s approaching 60. He keeps us guessing.

Alison Pill also brought a sense of ambivalence to her performance. Adding to Una’s tragedy is that she loves Ray, but it’s a twisted, adolescent attraction that she’s doomed never to escape.

Williams means to give a big, bravura performance that starts at a white-hot pitch and descends into near madness. Two years ago, she was merely fidgety for her disappointing Broadway debut as Sally Bowles in “Cabaret.” Her performance as Una  is mannered to the point of distraction. It’s as if the sexual abuse her character suffered 15 years ago has caused not only a speech impediment but uncontrollable physical spasms that now affect her walk, gestures, and facial expressions.

As a film actress, Williams can be subtle and nuanced. On stage, she’s the opposite: showy and contrived. The result is an imbalance in performances that seriously undermines the drama between an unrepentant offender and his lost victim.