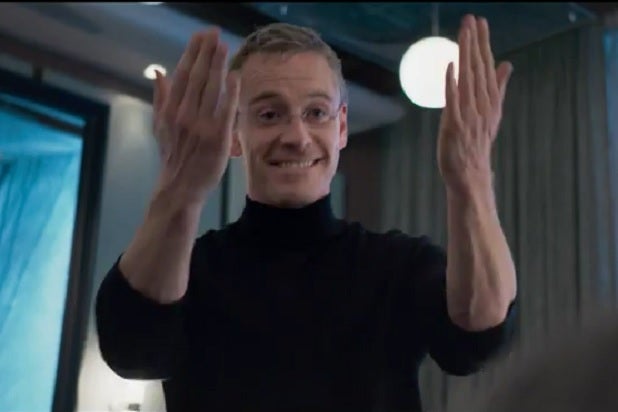 It was a bleak Friday at the box office.

That left Sony’s Jack Black horror comedy “Goosebumps” and Matt Damon‘s “The Martian” to battle for No. 1 this weekend, with both the defending champ and Fox’s Ridley Scott-directed sci-fi tale headed for roughly $15 million over the three days. “The Martian” led with $4.3 million and “Goosebumps” had $3.9 million on Friday.

The Steven Spielberg-directed “Bridge of Spies” ran fourth Friday with $3.3 million, but the Tom Hanks thriller will likely move up into third-place and is looking at a $10.5 million second weekend for DreamWorks and distributor Disney.

It was grim for the newcomers, all of which came in under expectations.

Vin Diesel‘s PG-13-rated action fantasy “The Last Witch Hunter” was third Friday with $3.8 million, but was expected to finish in fourth with just under $10 million over the three days for Lionsgate.

“Paranormal Activity: The Ghost Dimension” was fourth Friday with $3.7 million but the 3D horror film was expected to come in seventh with less than $7 million for the weekend. The sixth and final entry in the lucrative low-budget horror series was in just 1,656 theaters, about half the number previous films in the franchise rolled out in. That’s because several of the largest theater chains — including Regal, Cinemark, Carmike, Marcus and Harkins — refused to play it after distributor Paramount cut a deal with the AMC and Cineplex chains and said it would make it available via video on demand early, shortening its exclusive theatrical run.

“Rock the Kasbah,” an R-rated comedy starring Bill Murray as an over-the-hill rock band manager, bombed with $513,000 Friday and will finish out of the top ten with less than $2 million for the weekend for Open Road. Fans who did go gave it a “B-” CinemaScore, whicih is much better than the 8 percent approval rating from critics counted on Rotten Tomatoes.

“Jem and the Holograms,” a PG-rated live-action musical version of the 1980 animated TV show, did even worse. It took in $458,000 and may not top $1 million for the three days for Universal. First-night fans gave it a “B+.”

The performance by “Steve Jobs” may have been the most disappointing, however. Universal is having the best year at the box office in Hollywood history, and the biopic starring Michael Fassbender as the late Apple Inc. founder appears to be its best hope for awards and Oscar glory. But the big jump from 60 to 2,498 theaters in its third weekend was an aggressive expansion and it didn’t connect.

The drama, with a screenplay by Aaron Sorkin inspired by Walter Isaacson‘s biography and directed by Danny Boyle, took in $2.4 million on Friday and is looking at around $7 million for the three days. That’s well under the expectations of analysts and the studio, which projected a weekend total in the teen millions. It received an “A-” CinemaScore, which should help it bounce back and play steadily in the weeks ahead.

How Paramount’s gambit with the “Paranormal Activity” finale pans out won’t be clear until its video on demand run begins, and horror films are always a little different to gauge. The genre’s fan base — mainly young women — tends to turn out in droves on Friday night, then quickly dissipate. They even grade tougher than typical moviegoers, and “The Ghost Dimension” received a “C” CinemaScore.

This will easily be the worst debut for any film in the series in terms of grosses. However, it had the highest screen average for Friday with $2,083, which is 69 percent higher than that of the top movie of the night, “The Martian,” with $1,230. AMC and Cineplex were also the top two chains in terms of attendance Friday.

On its current pace, its per-location average for the weekend will be roughly $3.935, less than a third of the $13,838 that the first five films averaged. And it’s well under the $6,398 that the last “Paranormal Activity” movie, “The Marked Ones,” managed when it opened in second with $18.3 million in January last year.