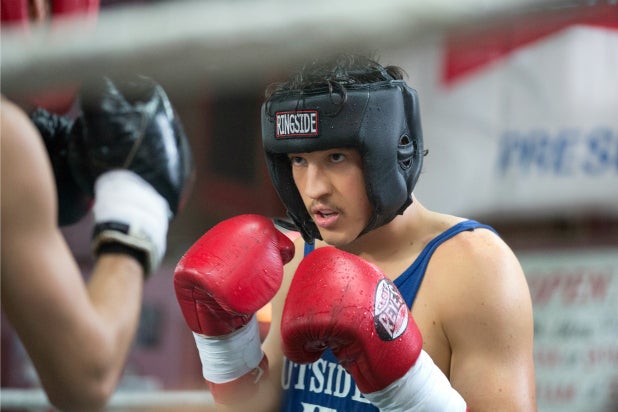 The boxing drama “Bleed for This” has a powerful story and a strong lead performance in its corner, but falls short of knockout status. Hampered by clichéd writing and stereotypical portrayals, this extraordinary true-life account feels run-of-the-mill. As written and directed by Ben Younger (“Boiler Room”) it’s not a bad movie; it’s just too familiar and conventional.

No doubt the comeback of Vinny Pazienza (a.k.a. “the Pazmanian Devil”) after a near-fatal car crash, a broken neck and paralysis must have felt like a cinematic win from the moment it was pitched. The tale’s powerful dramatic arc is undeniable. But Pazienza’s saga as depicted here feels overly simplified and lacking in heft. The intended uplift falters.

In fact, the notion that such a near-miraculous recovery is simple — which Pazienza asserts — feels disingenuous. Sure, the boxer had unbelievable grit and drive. But he also had the financial means to realize that determination, unlike many other similarly stricken accident victims.

Inspirational sports movies are a formulaic genre, but films like “Million Dollar Baby,” last year’s “Creed” and even this year’s chess saga “Queen of Katwe” have transcended those limitations. “Bleed for This” falls into the usual traps. The fault lies with a dull screenplay and a glaring lack of character development.

A bulked-up Miles Teller plays cocky boxer Pazienza, a champ in three different weight classes. Pazienza’s story of almost unimaginable will and doggedness is well-known to boxing fans: The mouthy Rhode Island fighter is at the pinnacle of his career, having just won a title, when he takes a drive with a pal that results in a horrific car accident.

Doctors tell him that with spinal fusion surgery he might be able to walk again. He dismisses them. Determined not only to walk but also to box again, he bucks the advice of his nay-saying physicians and worried family.

In defiance of doctor’s orders he begins to train, undeterred by the impediment of an elaborate halo, a medieval-looking metal device that covers his head and holds his broken neck together. When it’s screwed and bolted to his skull the boxer refuses pain medication for the tortuous agony. That’s how tough he is. And how compulsively single-minded.

Surreptitiously, he trains in his basement, coached by the hard-drinking Kevin Rooney (an almost unrecognizable pot-bellied, balding Aaron Eckhart).

Pazienza’s boxing-obsesssed father, played by the estimable Ciarán Hinds, has pushed and prodded him into the ring. But when his son is so badly injured, he blames himself for having encouraged him to fight.

Also Read: Miles Teller Is Down for a 'Fantastic Four' Sequel

Teller is one of the most talented and versatile actors of his generation. It would seem a safe bet to predict a long and impressive career for this 29-year-old, after his vulnerable performance as a young driver who kills a little boy in “Rabbit Hole,” his nuanced portrayal of a troubled teen alcoholic in “The Spectacular Now” and his complicated jazz drummer in “Whiplash.” Playing a cocky athlete is something new for Teller, but he’s already proven to be great at playing compulsives, and the actor dives into this part with evident gusto.

Hinds leaves behind his characteristic Irish gravitas and digs into the role of a Rhode Island boxing aficionado. He nails the accent. Eckhart’s has-been trainer is a less flashy role, but no less effective.

Their lives outside the boxing ring are glossed over, however. While the characters are enjoyable to watch, they feel more like types than fully realized people. And Pazienza’s obsession to return to the boxing ring more often feels dangerously risky, rather than laudable. What fuels his obsession and determination goes unexplored.

Scenes in the ring are perfunctory and unexciting, at least to this admittedly inexpert judge of boxing matches. Cinematically, they lack that killer punch. Watching the halo apparatus being painfully screwed to Pazienza’s head is more riveting than the fights in the ring.

Oddly, this story of steely determination lacks a sense of urgency, despite all the key narrative ingredients for a blow-out. The trio of main performances are what make “Bleed for This” entertaining, despite the sense that we’ve seen this movie — and variations of the macho lead character — several times before: Pazienza objectifies women, he enjoys taking financial risks, he needs to win at all costs. Perhaps this just isn’t the right movie for this moment in history. Or perhaps it could have been, had the main character’s motivations been more thoroughly explored.

The film will surely draw comparisons to “Raging Bull,” especially given Martin Scorsese’s involvement as executive producer. But where Scorsese delved into Jake La Motta’s egotism, as well as his determination, Younger stops short of examining Pazienza’s. He seems more interested in making another well-worn tale of triumph against the odds. But showing us that triumph without accompanying analysis seems sadly hollow.