Friday box-office update:
Building momentum with family audiences, Warner football film "The Blind Side" actually outdrew "Twilight" sequel phenomenon "New Moon" at the domestic box office Thursday, taking in $9.5 million vs. $9.2 million, according to studio data.
Summit’s "New Moon" is still expected to win the five-day holiday box-office race, with the film forecasted to finish at about $70 million.
Starring Sandra Bullock and Kathy Bates, "Blind Side" is expected to complete the five-day period at around $60 million, with its audience projected to grow more than 25 percent week-to-week from Friday through Sunday.
Meanwhile, also experiencing a ticket-selling spike on Thanksgiving, "Disney’s A Christmas Carol" finished third Thursday with $3.8 million. The $200 million Robert Zemeckis 3D movie is also on pace to finish in the third-or-fourth-place area overall during the holiday, with projections putting its five-day total at over $26 million.
If those forecasts hold true, the latest Charles Dickens adaptation will have grossed about $109 million domestically after four weeks of release, with about three more weeks of 3D play left in it before "Avatar" arrives and takes its screens away. Disney also has the bulk of its foreign receipts still pending for the picture.
Disney also saw its new family-targeted live-action entry, "Old Dogs," finish fifth Thursday, with the $35 million film — starring Robin Williams and John Travolta — taking in $4.2 million and on pace for about $27 million over the five days of the Thanksgiving holiday.
As for other new entries, Warner action film "Ninja Assasin" finished fourth Thursday with $4.6 million and is on track for a holiday of about $25 million.
Turkey Day box-office update:
Vampires, werewolves, homeless left tackles and global disasters continue to dominate the domestic box office going into the Thanksgiving holiday, leaving newer “dogs” out in the cold.
Meanwhile, another darkly themed Cormac McCarthy adaptation took its first steps to what its principals hope will be Oscar glory.
Finishing first again Wednesday as expected, Summit Entertainment’s “Twilight Saga: New Moon” added another $14.3 million to a domestic box-office total that now stands at $179 million after less than a week in release, according to studio estimates.
With the big Friday-after-Thanksgiving – traditionally the biggest movie-going day of the year – still pending, Summit Entertainment’s “Twilight” sequel is pace to collect over $70 million in domestic receipts over the five-day holiday period.
In second place, Warner sports dramedy “The Blind Side” starring Sandra Bullock is using exceptional word-of-mouth to pick up steam. That PG-13-rated film took in $7.9 million Wednesday. Its performance over the coming three-day weekend period is actually expected to be up about 25 percent over its premiere weekend.
In third place, Sony’s Roland Emmerich-directed “2012” continues to chug along, adding another $3.4 million to its domestic total.
Back in the pack behind three incumbents, Disney family-targeted live-action film “Old Dogs” also took in just $3.4 million Wednesday. The five-day projection for the poorly reviewed PG-rated movie, which stars John Travolta and Robin Williams, stands at $25 million.
Even further back in the pack, Warner’s Wachowski Bros.-produced action film “Ninja Assassin” looks like it got whacked out of the gate, finishing in sixth place Wednesday with $2.5 million. The $40 million film is on pace to finish the five-day holiday period with just over $18 million in receipts.
Meanwhile, finding its way into the top 10 despite opening in only 88 U.S. theaters Wednesday, post-apocalyptic McCarthy adaptation “The Road” took in just over $243,000 — a solid start for a movie that distributor The Weinstein Company hopes will garner Oscar consideration for star Viggo Mortensen.
Tuesday box-office preview:
The box office will be stuffed for Thanksgiving.
Coming off the second biggest non-holiday weekend box office in history, studios and exhibitors enter a five-day holiday period that is traditionally flush with ticket sales.
This one is no different. Starting Wednesday, with addition of wide-openers “Old Dogs” from Disney and “Ninja Assassin” from Warner Bros., along with the expansion of Fox’s “Fantastic Mr. Fox,” the competition will be thick as gravy.
Not so important for the box office, but key for Oscar buzz, the weekend also will feature the limited-release debut of Weinstein’s much-buzzed-about, post-apocalyptic Cormac McCarthy adaptation “The Road” starring Viggo Mortensen. Other awards-seekers opening in limited release over the holiday include Richard Linklater’s "Me and Orson Welles," which stars Zac Efron, and "The Private Lives of Pippa Lee" featuring Keanu Reeves and Robin Wright Penn.
And have we mentioned last weekend’s big draws: "New Moon" and "The Blind Side"?
“I know it’s a holiday, but matching up with last weekend is not going to be easy,” said Disney distribution president Chuck Viane, noting last weekend’s $258 million overall domestic box-office marketplace, which was just $2 million short of the all-time record. “We don’t have a $140 million monster this time.”
That “monster,” Summit Entertainment’s “Twilight Saga: New Moon,” took in $142.8 million last weekend. It will most likely once again lead the five-day box-office, even though most studio distribution personnel believe a drop-off of 60 percent or more is inevitable.
But that would still leave "New Moon" with more than $80 million in ticket sales. 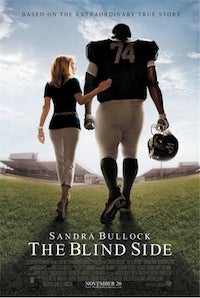 With an additional $10.7 million in domestic gross through Monday, the “Twilight” sequel enters the five-day holiday period having taken in $153.6 million in North America, as well as $132 million on 6,672 prints in 25 foreign territories.
A virtual lock to come in second place, meanwhile, is the Warner Bros. tearjerker “The Blind Side" starring Sandra Bullock, which enjoyed exceptional word-of-mouth last weekend while vastly outperforming pre-release expectations with a $34.1 million weekend.
With the Alcon-produced, football-themed flick garnering the rare air of an “A-plus” CinamaScore grade, Warner officials are predicting a week-to-week slide of less than 20 percent. In fact, some box-office trackers are projecting virtually no drop at all for “Blind Side,” with a few forecasting that the film could ultimately take in as much as $200 million in North America.
Also still representing a significant incumbent factor: Sony’s “2012,” which has now surpassed $450 million globally.
With “New Moon," "Blind Side” and "2012" once again providing most of the gravity for ticket buyers, the modestly budgeted trio of “Old Dogs,” “Ninja Assassin” and “Fantastic Mr. Fox” are all likely to experience only modestly girthed turkey days.
Produced by Andy and Larry Wachowski, and Joel Silver, and directed by James McTeigue (a second AD on “The Matrix” and numerous other Wachowski Bros. projects) the $40 million “Ninja Assassin” will look to counter-program a market that is largely devoid of action movies, save for “2012.”
“It looks great and it’s tracking well with its core audiences,” said Warner distribution president Dan Fellman, who predicts the R-rated film will end up in the $20 million range over the holiday period. 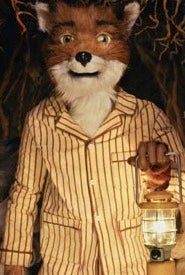 Also hoping for a five-day payoff eclipsing the $20 million mark, Disney will debut the PG-rated “Old Dogs,” a $35 million family film starring Robin Williams and John Travolta, in over 3,300 venues.

“Our secret weapon, if we have one, is that we’re the comedy choice for the weekend,” said Viane, noting the few laugh-oriented films in a box office dominated by vampires, werewolves, homeless teenage football players and cataclysmic disasters.
But it’s "Blind Side" that’s of growing competitive concern for everyone who is not Warner.
“We’re all concerned about ‘Blind Side’ affecting our gross, but I think it’s going to be ‘Old Dogs’ that ends up getting hurt the worst,” said one studio distribution official.
While trying to get “Old Dogs” launched, Disney is battling on two other fronts. For one, it’s beginning the first leg of a platformed launch strategy for its hand-drawn animated film “The Princess and the Frog,” which will debut this weekend on the Disney lot in Burbank, as well as New York’s Ziegfeld Theatre, before going wide Dec. 11.
Meanwhile, Disney is trying to maintain the legs of its expensive Robert Zemeckis 3D film “A Christmas Carol,” which enters the holiday period having grossed about $80 million and in need of the $20 million-plus five-day haul Disney officials are predicting for it.
“I believe ‘Christmas Carol’ will become an evergreen title like ‘The Polar Express’ which comes around every year,” Viane added.
Adding to “Christmas Carol’s” competition in the family-targeted animation, which also includes week two of the Sony-distributed “Planet 51,” Fox Searchlight’s “Fantastic Mr. Fox” will expand to more than 2,000 theaters Wednesday.
Directed by Wes Anderson and voice-casted by George Clooney and Meryl Streep, Fox distribution officials are hoping the film clears double digits over the five days.
Also on Wednesday, The Weinstein Company will lightly enter the fray with “The Road,” which opens in 88 U.S. theaters.
x
Looks like you're enjoying reading