Normally, a $40 million movie’s $34.1 million domestic opener on a non-holiday weekend would lead entertainment news pages. Of course, when that happens alongside the third biggest premiere in movie history — "The Twilight Saga: New Moon" — the story winds up in the media’s blind spot. 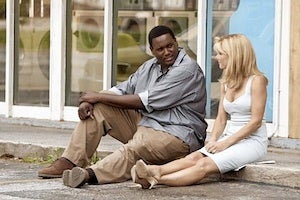 But entering Thanksgiving weekend, traditionally a hot time at the box office, Warner’s “Blind Side” finds itself with plenty of momentum, with some trackers predicting the film will ultimately do as much as $200 million in domestic business before it’s through.
“They might be drinking a little Kool-Aid, but I think the movie will get into the $160 million category,” said Dan Fellman, president of distribution for Warner Bros. Pictures.
“I think this movie is going to hang around a long time,” added a distribution president for a rival studio. “Word of mouth is just stellar.”
Going into the weekend, Warner officials had projected that “Blind Side” would only to do about $20 million-$25 million over its first three days. The sports movie with female-targeted heart, produced by Alcon Entertainment and directed by John Lee Hancock (“The Rookie”), stars Sandra Bullock as a suburban mom whose family takes in a troubled teen with loads of football potential.
According to Fellman, the projection was largely based on the comparable pre-Thanksgiving 2005 performance of Fox Johnny Cash biopic “Walk the Line,” which premiered to $22.3 million while also opening against a behemoth, Warner/New Line’s “Harry Potter and the Goblet of Fire” ($102.7 million).
But word-of-mouth for “Blind Spot” has indeed proven exceptional, with the film earning a rare “A-plus” CinemaScore ranking.
“This doesn’t happen very often,” said Fellman, noting that only 14 other films have received this high a mark (Disney/Pixar’s “Up” was the only other film this year to get one).
Meanwhile, “Blind Side’s” audience composition, which skewed about 60 percent female and 70 percent older than 25, also ended up working in its favor.
The PG-13-rated film – which was based Michael Lewis’ popular nonfiction football book “The Blind Side: The Evolution of a Game” – had a key advantage over “New Moon” in terms of attracting couples. Let’s just say that by drawing only about 20 percent male, the “Twilight” sequel wasn’t successful at bringing in a lot of boyfriends and husbands.
Lewis’ 2006 book, which received tons of dude-centric praise from media outlets including Sports Illustrated, chronicled the rise in stature of football’s left tackle position, which he illustrated was a direct response to the emergence of freakishly athletic, quarterback-endangering defensive linemen and linebackers like Lawrence Taylor.
Part of the book showcased the troubled youth of Michael Oher, who with the altruistic help of a Memphis housewife (played by Bullock), overcame teenage homelessness and now gets paid millions to protect the blind sides of NFL quarterbacks.
In its trailers and TV ads, Warner emphasized these maternal aspects of the film over the sports-movie stuff.
“I think we had a wonderful campaign for the movie,” Fellman said. “It just shows you that you can counterprogram the marketplace.”
It helps, he added, when that marketplace happens to be the second biggest non-holiday box office in history, with exhibitors taking in about $258 million, all told, over the weekend. (Warners officials also concede that some of its business came from "New Moon" sellouts, with moviegoers seeking an alternative).
The only bigger non-holiday box office came in July 2008, when Warner’s “The Dark Knight” established the current all-time three-day opening mark for a film ($158.4 million), leading an overall box-office that was only slightly bigger at $260 million.
“To be $2 million off the all-time record, which was set in the summer when the kids aren’t in school, and to do that number in November, that’s amazing,” Fellman said. “That just shows you that the market can expand to any amount it wants to as long as people have films they want to see.”