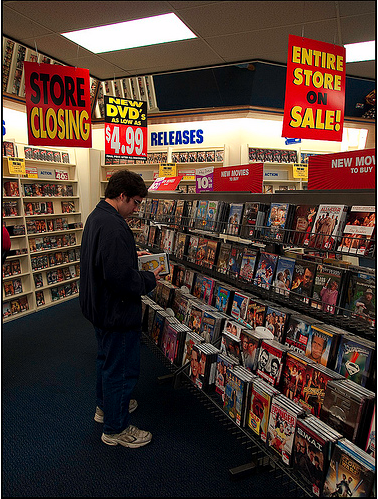 Embattled movie rental chain Blockbuster Video could be flirting with filing for chapter 11, while asking studios to toss them a lifeline by reducing the price of DVDs, according to Bloomberg.

The company did not immediately return TheWrap's calls for comment, but in its filing with the Securities and Exchange Commission, it indicated that it might seek bankruptcy protection as part of a debt-for-stock exchange with creditors.

However, in an interview with Bloomberg, CEO James Keyes said that language was included at the behest of the company's lawyers and denied that a chapter 11 filing was imminent.

Keyes did say in the interview that he has reached out to studios to discuss getting product for a lower price in exchange for granting them a bigger revenue stake.

The Dallas-based chain has been struggling to chip away at over $850 million in debt, while challengers such as Netflix and Redbox continue to eat into the chain's market share.

If Blockbuster can get new releases at a lower price from Hollywood studios, it hopes it can better compete with the subscription and kiosk movie rental companies.

Movie companies have already proved useful, pressuring Netflix and Redbox to adhere to a 28-day release window before they can start carrying newer films, protecting Blockbuster's status as the destination for new releases.

Blockbuster recorded an even worse than anticipated fourth quarter last month. The once proud movie rental giant reported a net loss of $434.9 million, or $2.24 per share, compared with a loss of $359.8 million, or $1.89 per share, a year earlier. Revenue fell to $1.08 billion, down 18 percent from $1.31 billion for the same period one year ago.