“This time last year, we were all pretty depressed. We wouldn’t have shown up here,” quipped Sony Pictures Home Entertainment president David Bishop, expressing the mood of his industry at Tuesday’s “Blu-Con 2.0” trade event at the Beverly Hilton.

Indeed, after watching the DVD market precipitously fall 10 percent since it peaked in 2004, cratering a disastrous 6 percent last year to $22.4 billion, Bishop, along with the three other home entertainment presidents being questioned by Merrill Lynch senior media analyst Jessica Reif Cohen on a morning panel, appeared almost giddy. 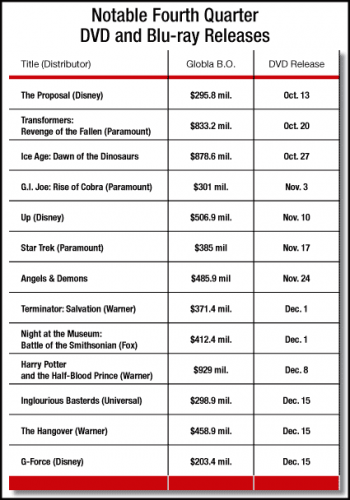 Of course, none of the men on Tuesday’s panel – which also featured Warner Home Video president Ron Sanders and Fox Home Entertainment president Mike Dunn — were affiliated with Paramount.

That’s the studio behind the “Transfomers” sequel disc release, which debuted to an impressive 7.5 million combined DVD and Blu-ray sales during its first week on store shelves last month – strong numbers that, on first glance, look more like they came out of 2005, DVD’s heyday, rather than today’s more depressed market.

But these days, regardless of whether the success is affiliated with their own studio, DVD business denizens take good news where they can find it.

After enduring perhaps the lowest ebb in consumer confidence since the 1930s, along with the fading of yesterday’s “it” product, the DVD, the home entertainment guys find themselves in the crucial fourth quarter, the part of the year when they do the majority of their business, with some wind finally at their backs.

For one thing, they have the benefit of a record revenue summer at the box office now moving into DVD and Blu-ray release.

No less than 13 movies that made more than $200 million at the global box office will be released in the fourth quarter, with not only a “Transformers” coming down the pike, but also “Harry Potter and the Half-Blood Prince” ($929 million globally) and “Ice Age: Dawn of the Dinosaurs” ($878.6 million).

For another, home entertainment executives say newer platforms including Blu-ray and selling movies and shows over iTunes should finally carry some water.

Tuesday’s event, which was dedicated to showcasing Blu-ray, a disc technology that still hasn’t widely caught on with consumers more than three years after its initial release, also featured a presentation from Best Buy executive VP of consumer operations Mike Vitelli. He revealed that format should be his chain’s hottest-selling category this fourth quarter in terms of both players and titles. Vitelli predicted a 112 percent year-over-year uptick in sales.

Meanwhile, among the 7.5 million “Transformers 2” discs moved during the first week, 1.2 million of them (16 percent) were Blu-ray.

“We have a lot of tools now that we haven’t been previously able to play with, like Blu-ray, because they’ve been so nascent,” Kornblau noted.

“I think we’re all cautiously optimistic that things are moving in the right direction,” Bishop added.

However, none of this should be taken to mean the home entertainment market will actually grow this year.

For example, the TV DVD category, which once accounted for at least 25 percent of DVD sales, has been largely plundered, with the majority of studio catalog already published on disc.

While full-season sets of new shows are still hot sellers, advanced seasons for older programs don’t move like they once did. (“Volume 2” of “Cannon” anyone?)

“Older product that’s longer in the tooth is harder to sell than it used to be,” conceded Fox’s Dunn.

According to Warner’s Sanders, despite an improvement in “consumer anxiety” and what he sees as lots of “green shoots,” the overall video industry should finish down in the “single digits this year,” with the sales performance of Blu-ray dictating whether that percentage is ultimately closer to a “1” or a “9.”

In fact, the panel of executives unanimously targeted 2012 as the year that emerging technologies like Blu-ray and home 3D (showcased at Blu-Con by Panasonic) finally establish themselves, and the overall market starts growing again.

Until then, Dunn told TheWrap that the business will remain driven by lower-margin rentals rather than more profitable disc sales, which he expects to be down year-to-year about 12 percent in the fourth quarter.

“I think we’ll be up overall in units sold,” he noted. “But prices will be down."

"Nobody’s happy," Dunn said, "but you still come to work every day."