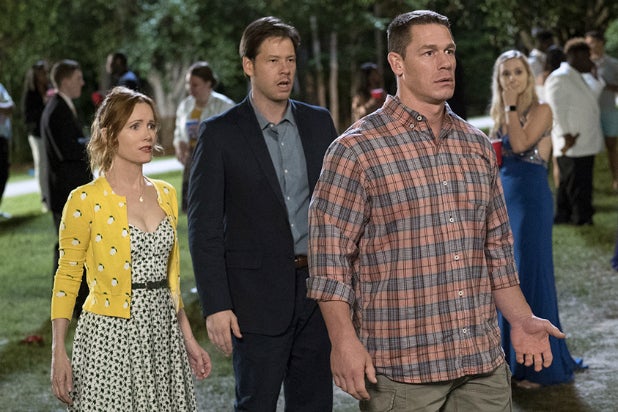 What does it mean that writer Kay Cannon is helming the studio coming-of-age comedy “Blockers” for Universal Pictures? Everything and nothing. A few elements — notably how the film portrays its female characters — seem clearly crafted by a woman, but with those exceptions, “Blockers” is simply an Apatow-esque comedy with tightly crafted jokes, which makes it all the more embarrassing that women have not been given the keys to these types of pictures before.

The film stars three relatively unknown young actors who play teen girls wanting to get laid on prom night — Geraldine Viswanathan as Kayla, Gideon Adlon as Sam and Kathryn Newton as the blond ringleader Julie. It’s Julie’s eagerness to lose her virginity that spurs the other girls to form a pact with her: All will pop their cherries in the same night.

Yes, a ton of films driven by men have featured the same storyline. Think “Porky’s” but less crude, and instead of the teens solely in the spotlight, their parents share the narrative with them, where both the younger and older generations are learning lessons in a double-edged coming-of-age tale.

Leslie Mann plays Lisa, the sweet but overbearing mother of Julie, whom she’s raised as a single lady trying to get it right, though the story doesn’t ever explicitly mention her singledom. She simply is, and nobody is trying to set her up with men; it’s rare for a studio comedy to allow its older female characters to remain their own person without sticking them with a romantic subplot. This is one of a few ways we can see Cannon’s touch on this project.

When Lisa spots some of the emoji-laden texts Julie’s sending to her best buds in the limo on the way to prom — via a Mac that’s connected to Julie’s iPhone — Lisa sets off with two other parents — Hunter (Ike Barinholtz) and Mitch (John Cena) — to try to thwart their respective children’s sex plans.

Hunter is a booze-hound deadbeat dad who’s not particularly concerned about his daughter Sam having sex; he is, however, concerned that it’s with a boy, since he can tell that Sam’s closeted and into girls. Mitch is… well, he’s John Cena, charmingly earnest like an innocent child stuck in a giant man’s body. You get the feeling he’s the kind of guy who would kindly escort spiders out of the home.

In some ways, the writing of this film does seem as though it’s been frozen in time since “American Pie,” waiting to unleash a “What if… but girls?” It should be noted this film is written by five men, and sometimes it very much feels like it. That the characters all arrive at the fact that they will lose their virginity on prom night is a vestigial storyline leftover from the heydays of teen comedies of the 1980s and ’90s, but the writers do seem aware of their predecessors. Kayla even quips about the movie “American Pie,” calling it a “romantic comedy” (which is simultaneously hilarious and depressing).

But there’s also a plus side to five men writing this story. All three boys who court the teens are written as though they would do the right thing in any situation. Sure, they’re horndogs, but they’re also gentlemen, dudes who would bake special cookies for their dates on their big night and talk about their feelings. It’s refreshing to see a different kind of teenage boy than we’ve seen in the movies previously, the kind who is careful and considerate and would like his first time with a girl to be special, too. Miles Robbins, who plays Kayla’s wannabe hippie date Connor, delivers some of the heartiest laughs from the bunch.

Out of the girls, Newton is the most experienced actress of the trio, having portrayed the raped-and-murdered daughter of Frances McDormand’s character in “Three Billboards Outside Ebbing, Missouri,” which is a polar-opposite role from the kind and considerate goody-goody she is here.

Adlon is essentially a carbon copy of her husky-voiced mom, Pamela Adlon, which is great, but it’s Viswanathan who gets to steal the show with one-liners; when she picks out her sex partner randomly in the lunchroom, she declares that boys are like plungers — not there to look good, just to get the job done. Cena and Viswanathan’s dad-and-daughter chemistry warms the heart. She may be slight in build, but Viswanathan’s presence onscreen is big and perfectly matched to her fictional dad’s, and if there’s gonna be a breakout comic star from this film, it’ll likely be Viswanathan.

With “Blockers,” Cannon isn’t trying to reinvent the wheel, but she is solidly landing a joke a minute, even if most of the scenarios in this film are ripped from movies from two decades ago — there’s even a vomit scene that echoes “Problem Child 2.” Remember “Problem Child 2”? But it’s the little, almost imperceptible twists to the story that make “Blockers” a worthy entry into the teen sex comedy canon, most notably that girls and women are funny and can play more than the killjoy or the babe.