If Mel Gibson makes a great movie, and no one in America wants to see it, does it make a sound? His last lead in a genre film, “Get the Gringo,” got positive reviews in 2012 but had a blink-and-you-missed-it theatrical release. It would be a real shame if his latest, “Blood Father” were to meet the same fate — it’s grungy and action-packed, yes, but it also features the kind of sharp characterization and clever dialogue that justifies the presence of an old pro like Gibson.

One year out of prison, Link is a tattoo artist doing his best to avoid violating either his sobriety or his parole. He’s got a lot of regrets, first and foremost that he’s completely lost track of his missing daughter Lydia (Erin Moriarty, who’s also being represented at the Karlovy Vary festival with Sundance fave “Captain Fantastic”).

Also Read: Move Over Liam Neeson, Mel Gibson Is Back With a Vengeance in 'Blood Father' Trailer (Video)

Lydia’s having problems of her own: She just accidentally shot her drug-kingpin boyfriend Jonah (Diego Luna) in the neck, so she’s on the run from both the cops and the cartel, with only her long-estranged father to turn to.

Before long, dad and daughter hit the road in a beat-up Chevy Nova, encountering a series of folks — most of them played by memorable character actors — some of whom help the fugitives, while others hinder. 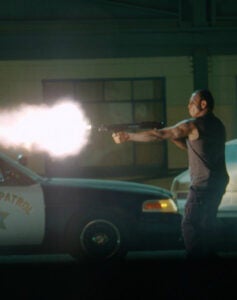 Director Jean-François Richet (“Mesrine 1&2,” the “Assault on Precinct 13” remake) keeps the action set pieces and shootouts coming with bracing regularity. And unlike many thrillers, “Blood Father” doesn’t grind to a halt while it’s catching its breath, thanks to the spot-on screenplay by Andrea Berloff and Peter Craig (adapting Craig’s novel).

They’ve loaded the film with lots of great two-person scenes that allow the cast to do something besides run and shoot. Whether it’s Lydia calling Link on his anti-Mexican bias (what American orange pickers, she asks him, are losing their jobs to undocumented workers?) or Link on the phone with a concerned Kirby, assuring him that “I’m not dying, I’m just in El Centro,” there’s a lot of terrific honest-to-gosh banter going on here.

Any movie that lets Thomas Mann (as a helpful hotel clerk) be dorky and flirty, gives Dale Dickey some raspy-deadpan one-liners, and puts a fascinatingly creepy monologue in the hands of Michael Parks knows exactly what it’s doing.

And that applies all the way up to Gibson, who makes Link wonderfully world-weary but not beyond redemption. Moriarty also makes a strong impression as a woman who’s tired of wrong guys and wrong decisions. (And if anyone ever makes a live-action version of the Rankin-Bass animated classic “Santa Claus Is Coming to Town,” she’s got the eyes and cheekbones to play the schoolteacher who becomes Mrs. Kringle.)

The very presence of Gibson these days could be considered “problematic,” and it’s quite possible that “Blood Father” will wind up flying well below the radar because of his participation.

But if you can separate the art from the artist — as most of us do at some point, or there’d be almost no movies or plays or novels or music or paintings left to enjoy — it’s a stone-cold gas.