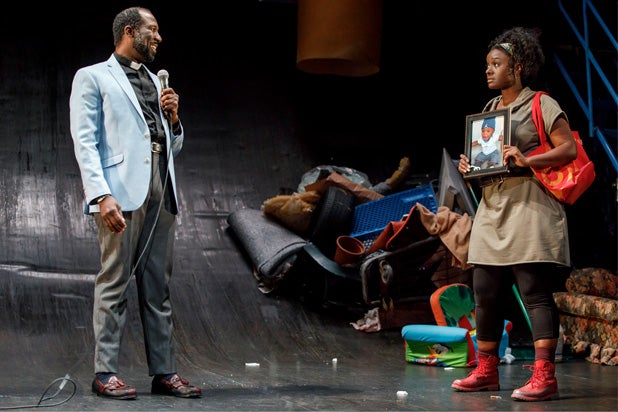 Several years before she won the Pulitzer Prize for “Topdog/Underdog,” Suzan-Lori Parks wrote a pair of plays seeking to riff on Nathaniel Hawthorne’s “The Scarlett Letter.” The more successful is “In the Blood,” which gets a spirited and stirring revival at Off-Broadway’s Signature Theatre complex — where its Brechtian counterpart, “F—ing A,” is playing just across the hall.

For “In the Blood,” Parks reimagines Hester Prynne as an inner-city woman struggling to make ends meet as she raises her five children, each the product of a different, long-gone father.

As played by the remarkable Saycon Sengbloh (“Scandal,” “Eclipsed”), this Hester is a “welfare queen” striver who recognizes her own role in her predicament (“My life’s my own fault, I know that”) but maintains a compelling optimism despite the many odds stacked against her — from illiteracy to economic deprivation to societal rejection in many forms.

The word “slut” is tossed in her direction quite a bit and yet it doesn’t slow her down. “We ain’t got our leg up just yet,” she says early on, “so we gotta live with mean words.”

Mean words are Parks’ stock in trade in this piercing study of a society that exploits its underclass at every turn. We get five separate “confessions” from people in Hester’s life, from her welfare overseer (Jocelyn Bioh) to her free-clinic doctor (Frank Wood) to her best friend (Ana Reeder) to her first love and the father of her oldest (Michael Braun) — all of whom admit to exploiting Hester sexually for their own selfish reasons.

As in Hawthorne, the worst offender may be the man of the cloth responsible for fathering her youngest child: He’s a street preacher named Reverend D (Russell G. Jones) who speaks of taking personal responsibility from the pulpit but stalls Hester when she comes around seeking child support and using his own lessons on him.

The five performers also make multiple quick changes to play Hester’s brood, from the eldest (Braun) to the baby (Jones). Director Sarah Benson orchestrates both the onstage action and the brisk transitions between scenes with admirable grace, and makes smart use of Louisa Thompson’s ingeniously versatile set — which suggests a giant playground slide as well as the trash-filled landscape under the bridge where Hester and her family have been seeking shelter.

Between scenes, fresh detritus is dumped from a chute in the ceiling — a nicely evocative image of how misfortune seems to keep piling up for Hester and her brood.

Parks flirts with making Hester too saintly in her suffering, refusing food at every opportunity so that her kids are fed. And for a college-educated, award-winning playwright describing the conditions of a class she does not know first hand, she also opens herself up to charges of intersectionality — a term that has only emerged since the first production of this drama nearly two decades ago.

But her writing is sharp and nuanced despite the fact that her characters are mostly nameless archetypes (The Welfare Lady, Amiga Gringa). And she manages to avoid the trap of fetishizing Hester’s predicament. As The Doctor says at one point to justify his lascivious history with his patient, “Suffering is an enormous turn-on.”

In “In the Blood,” Parks makes Hester’s suffering compelling, clear-eyed and utterly horrifying.