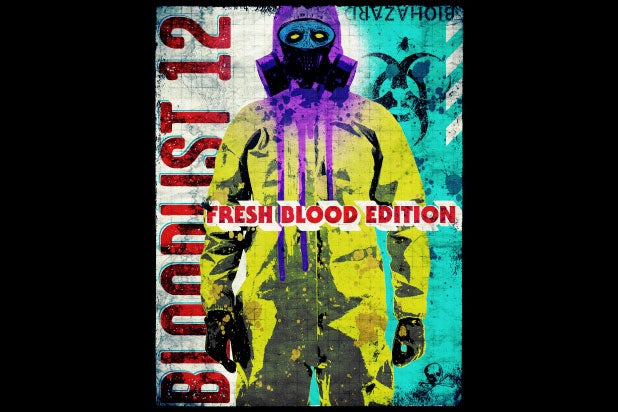 The 2020 BloodList is here, and this year, it focuses on its Fresh Blood, which showcases unrepresented and undiscovered writers.

The projects, the topics ranging from zombie horror to hitchhiking to bio-tech, were chosen out of 457 submissions that were received via the BloodList’s free submission system. It even includes a script about that is inspired by the real-life unsolved mystery of Bella in the Wych Elm in the U.K.

The BloodList is an annual list of the best unproduced screenplays and pilots of the year. It was created in 2009 by Kailey Marsh, who is a manager and producer at Brillstein Entertainment Partners.

Some of the most popular produced scripts that have appeared on the annual BloodList over the years include “Arrival,” “Birdbox,” “The Shallows,” The Autopsy of Jane Doe,” “Warm Bodies,” “We Summon the Darkness” and the upcoming “Wally’s Wonderland” starring Nicolas Cage.  Last year, Olivia Wilde’s “Don’t Worry Darling” topped the list.

“There are so many new and exciting creators in the horror and dark-genre space right now, and we are happy to be shining a light on their work,” Marsh said in a statement.

See the projects below.

Black Mourning Cemetery (Pilot)
Writer: Briana Bougard
Logline: When a Black person is unjustly killed, their spirit torments anyone connected to their murder. To prevent this, their remains are buried at a private cemetery owned by a witch, who performs a ritual to reveal the disturbing events leading up to their death, and hopefully bring them peace.
Genre: Horror

Company Man (Feature)
Writer: Nancy Duff
Logline: A lonely insurance adjuster living in a post-zombie-apocalypse world becomes marked for termination by the government agency tasked with zombie control. When he meets the adult daughter he never knew he had, they must race against time to steal the cure.
Genre: Sci-Fi/Dark Comedy

Paragone (Pilot)
Writer: Travis Neufeld
Logline: In an alternate universe where the vast proliferation of paranormal entities has given rise to a multi-billion dollar paranormal remediation industry, a downtrodden crew of ParaGone™ ghost hunters work to uncover the truth about entities, the afterlife, and the agency they work for — all in a bid to stop one of the most violent malevolent entities in history.
Genre: Horror

Taroko (Feature)
Writers: Kerry Yang & Steve Emmons
Logline: Deep within the vast Taroko wilderness, a devastating earthquake has released the spirits of those who have been trapped in limbo since WWII. A little girl named Mei Mei is brought to Taroko to attend her grandmother’s funeral when she’s swept away in a landslide and wakes up way down river. She’s alone in the woods like The Jungle Book, but instead of animals, she’s surrounded by ghosts of the past. In order for her to get back to her family, she is given the mission by the mountain god of Taroko called Gaya to lead all the trapped ghosts out.
Genre: Dark Fantasy

The Butter Street Hitchhiker (Short story)
Writer: Chris Hicks
Logline: Haunted by his past, a driver picks up aghostly hitchhiker who will answer his deepest, darkest question if he drives him to his destination.
Genre: Horror

The Figure (Feature)
Writer: Michelle Hsu
Logline: In the male-dominated field of bio-tech, a female scientist aims to further her career by building a larger-than-life synthetic human being. Things do not go according to plan.
Genre: Horror/Sci-Fi

The Witch Elm (Pilot)
Writer: William Gillies
Logline: After discovering a skeleton buried deep inside a wych elm tree, a West-Midlands family becomes plagued by an ancient, malevolent witch intent on tearing them apart through sickness and disease. Inspired by the real-life unsolved mystery of Bella in the Wych Elm in the UK.
Genre: Horror

Wilder Than Her (Feature)
Writer: Jessica Kozak
Logline: After the death of their friend Beth, three friends reconnect on an annual camping weekend, but things grow increasingly strange and uncomfortable in the isolated forest as their friendship unravels and they begin to question each other’s motives for the trip.
Genre: Horror/Thriller/Dark Comedy