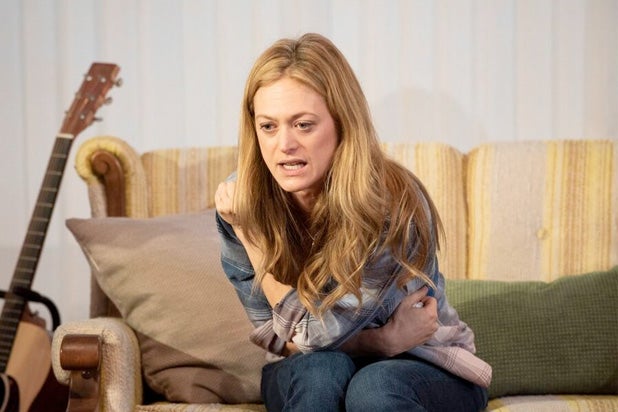 About midway through the second act of Abby Rosebrock’s funny, scintillating and ultimately bleak new play, “Blue Ridge,” the lead character repeatedly screams, “What’s wrong with meeee?!” The chilling effect of this question is that the character Alison knows precisely what’s wrong with her and can’t do anything about it.

In the drama, which opened Monday at Off Broadway’s Atlantic Theater Company, the remarkable actor Marin Ireland delivers a big, inventive, overwrought performance that might even be more devastating if it were cut in half. But then Alison is an amazingly big and messy character who finds herself in a drug and alcohol recovery center even though she doesn’t have a substance-abuse problem.

Rather, she has an anger-control problem, which has led her to take a hatchet to the car of her boyfriend, who happens to be the principal at the Blue Ridge high school in North Carolina where she works as a teacher. (The play’s poster features a car’s broken rear-view mirror alongside a baseball bat, but the character actually uses a hatchet, which is far more theatrical and therefore symbolic of Alison’s mindset.)

One of the real pleasures of Rosebrock’s writing is that, while Ireland’s Alison has more Appalachian twang than a half-dozen hillbillies, she’s one of the smartest characters on the New York stage at this moment. Her cultural references are deep and vast, she has no time for the religious and 12-step malarkey being spouted at the Bible readings that are part of her therapy-confinement.

Above all, she immediately sets up as her chief adversary the most powerful person in her vicinity: Pastor Hern (Chris Stack), who leads and, 10 years ago, co-founded the recovery center with a lay lesbian counselor named Grace (Nicole Lewis). Amazingly resourceful, Alison is clever enough to exploit an inappropriate relationship at the center, and uses it as blackmail to get her “sentence” commuted.

“Blue Ridge” clocks in at just over two hours, with intermission. Rosebrock might expand her second act to give us more time to witness the break-up of that inappropriate relationship. Alison’s discovery of this romantically inclined pair also seems unnecessarily abrupt.

What is perfectly developed, on the other hand, are Alison’s razor-precise and spot-on attacks on the pervasive male patriarchy surrounding her, and smothering her. So why does she so desperately want to return to the high school and the principal whose car she single-handedly totaled?

We never meet the high school principal, but Rosebrock tells us everything we need to know about Alison’s relationship with him in how she relates to the pastor and a new halfway-house arrival, the handsome and deceptively dim addict named Cole (Peter Mark Kendall). Kyle Beltran and Kristolyn Lloyd play the other two recovering addicts at the center.

Taibi Magar’s direction delivers such understated performances from this ensemble that there must be some method in her decision to let Ireland go hog wild, to use a country expression, with her mannerisms. It could be that Alison is such a human train wreck that Ireland’s overacting is symbolic of the chaos inside. Certainly, as with any disaster, you can’t take your eyes off her.

The other actors, however, achieve their effects with far less effort exposed. Stack could be the play’s villain, but plays the pastor with enormous sympathy. Kendall keeps us guessing about Cole’s motives, religious commitment and level of intelligence. And Lewis is heartbreaking in her grief at watching 10 years of service potentially unravel overnight.