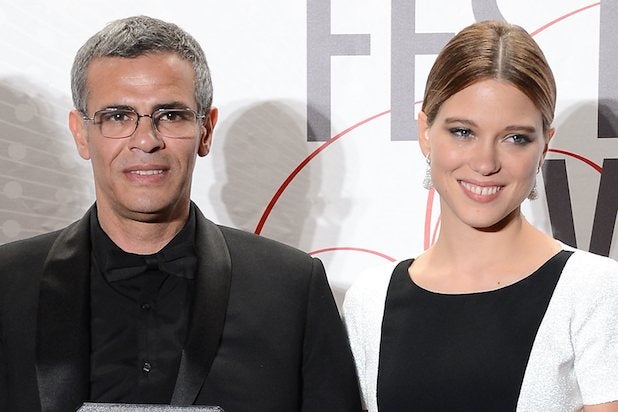 “Blue Is the Warmest Color” director Abdellatif Kechiche has had it with critics of his Palme d’Or-winning lesbian love story, and especially its star, Léa Seydoux.

The filmmaker (pictured above, next to Seydoux) published an open letter on French publication Rue89 on Wednesday, targeting newspaper Le Monde and journalist Aureliano Tonet, as well as  “arrogant, spoiled child” Seydoux.

“Miss Seydoux — after thanking me innumerable times in public and private, after crying in my arms in Cannes for having given her such a noble role for having allowed her to sublimate herself in this dramatic art — with no delay and with no personal coherence, radically changed her attitude toward me and risked the destruction of this already-fragile film a few weeks from its release,” Kechiche wrote.

The 28-year-old actress and her co-star Adèle Exarchopoulos had voiced complaints about the demanding director earlier this year, stating they wouldn’t want to work with Kechiche again.

“It was horrible,” Seydoux said of the five-and-a-half-month production in an interview with The Daily Beast. “He didn’t really know what he wanted. We spent weeks shooting scenes. Even crossing the street was difficult.”

Both actresses agreed the 10-minute sex scene was the hardest thing to shoot.

“Most people don’t even dare to ask the things that he did,” Exarchopoulos said. “And they’re more respectful.”

Also read: ‘Blue Is the Warmest Color’ Stars in Tear-Filled Spat With Director Over Difficult Shoot

Kechiche reportedly blew up at Seydoux during a Los Angeles press conference, and brought her to tears as he scolded her for complaining about “doing one of the best jobs in the world!”

The director’s lengthy letter slams Seydoux for “speaking of the production like some horror show” and portraying him as a “perverse manipulator who forced two young actresses to shoot sex scenes for 10 days non-stop.”

“How to explain such serious accusations, and a 180-degree reversal a year after the production, after so many demonstrations of admiration, love and gratitude?” Kechiche asks. “I see nothing more there than flagrant nonsense … and beyond that, perverse fakery and the worst kind of manipulation in a context where she knew that such lies would have a disastrous effect.”

If her criticisms of the production do end up affecting the success of the film — although, history has proven controversy usually only boosts box office performance — Kechiche hints he may pursue legal action.

“I will come back,” Kechiche wrote. “It is for her to explain in court.”