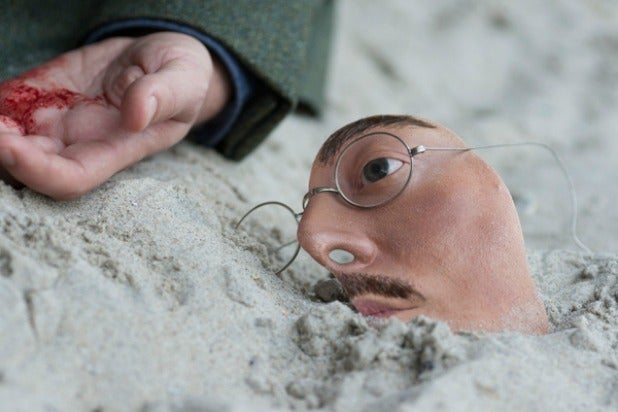 “Boardwalk Empire” star Michael K. Williams said last year that his character can’t have too many scenes with Jack Huston‘s Richard Harrow — because too many people would die.

We never imagined one of them would be Harrow, the masked marksman who became the heart of the show. He chose his words wisely, because his World War I disfigurement made it difficult for him to speak. He chose his shots with even more precision.

In last year’s season finale of “Boardwalk Empire,” Harrow was the hero of the day: the bespectacled avenger dispatched an entire bordello full of gangsters to rescue Tommy, the young son of his friend Jimmy Darmody.

Sunday, in the show’s Season 4 finale, Harrow finished the job of saving Tommy from a world of gangsters. With a long embrace and an “I love you,” he sent Tommy off on a train to the safe woods of Wisconsin, where he seemed ready to live as a father to the boy. A long kiss for Julia, the boy’s adoptive mother, told us Harrow was ready to be a real husband to her.

But then he took one last job. In exchange for Nucky revealing the location of Jimmy’s body — to get Gillian locked up for murdering her son’s doppelganger — Harrow agreed to take out Dr. Valentine Narcisse at the Onyx Club. The plan would have been perfect: Nucky would have Narcisse out of the way, Chalky’s rival would be vanquished, peace could return to Atlantic City.

But perhaps Harrow’s new family had made him soft. He did what he never does, and missed. Worse, he hit exactly the wrong person: Chalky’s daughter, Maybelle.

As William’s character on “The Wire” taught us, the baddest man in the city can die in the most unexpected ways. Though he could kill a dozen men, Harrow was shot by a single, unnamed henchman of Narcisse’s, and went out to collapse beneath the boardwalk and die. He took off his mask, and the glasses that, as we learned Sunday, he never really need to see. His last vision made us think he had made it to Wisconsin. He hadn’t. But Tommy has.

“Boardwalk” has lost its most captivating character before — Jimmy Darmody made a brief cameo again Sunday, from the grave. But Harrow’s tragic life and kindness in the face of it made him a more beloved character than Darmody ever was. Now we’re left with one purely sympathetic character — Chalky — and that world of gangsters.

And nine more months to wait and see how “Boardwalk” will stun us again.