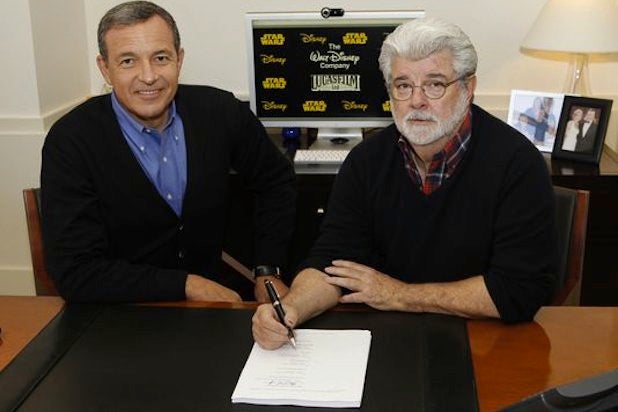 George Lucas has let his displeasure with the “Star Wars” films since he sold that and Lucasfilm to Disney. Now, Bob Iger has revealed more details about how the filmmaker felt “betrayed” by Lucasfilm’s creative decisions.

In his new memoir, “The Ride of a Lifetime,” Iger talks about a very tense meeting held between him, Lucas, and “Star Wars: The Force Awakens” screenwriters J.J. Abrams and Michael Arndt not long after the “Star Wars” creator sold his company to Disney for $4 billion. Lucas had prepared story treatments for the trilogy that, as he explained on James Cameron’s “Story of Science Fiction,” would have seen a grizzled Luke Skywalker train a Jedi Padawan named Kira and delved deeper into the infamous Midichlorians introduced in ‘The Phantom Menace.’

“There’s a whole aspect to that movie that is about symbiotic relationships. To make you look and see that we aren’t the boss. That there’s an ecosystem,” Lucas told Cameron.

“[The next three Star Wars films] were going to get into a microbiotic world. But there’s this world of creatures that operate differently than we do. I call them the Whills. And the Whills are the ones who actually control the universe. They feed off the Force.”

But at Iger and Lucas’ meeting at Skywalker Ranch, Lucas was upset when he was told that Abrams and Arndt would not be using his treatment and would be creating their own story.

“George knew we weren’t contractually bound to anything, but he thought that our buying the story treatments was a tacit promise that we’d follow them, and he was disappointed that his story was being discarded,” Iger wrote.

“I’d been so careful since our first conversation not to mislead him in any way, and I didn’t think I had now, but I could have handled it better. I should have prepared him for the meeting with J.J. and Michael and told him about our conversations, that we felt it was better to go in another direction. I could have talked through this with him and possibly avoided angering him by not surprising him.”

“Now, in the first meeting with him about the future of Star Wars, George felt betrayed, and while this whole process would never have been easy for him, we’d gotten off to an unnecessarily rocky start.”

Lucas’ frustration with Disney’s handling of “Star Wars” has been known for some time. He spoke about their decision to not use his treatments in a Charlie Rose interview done just weeks after “The Force Awakens’ was released in December 2015, saying that he sold his series to “white slavers” before stopping himself and giving a more diplomatic explanation.

“They weren’t that keen to have me involved anyway — but if I get in there, I’m just going to cause trouble, because they’re not going to do what I want them to do,” Lucas said. “And I don’t have the control to do that anymore, and all I would do is muck everything up.  So I said, ‘OK, I will go my way, and I’ll let them go their way.'”

And ultimately, Lucas didn’t like the way Abrams and Lucasfilm head Kathleen Kennedy went. While Lucas attended the Hollywood premiere of “The Force Awakens,” he told Kennedy and Iger at a private screening days before that he didn’t like the film because there was “nothing new.”

“In each of the films in the original trilogy, it was important to him to present new worlds, new stories, new characters, and new technologies,” Iger wrote. “In this one, he said, ‘There weren’t enough visual or technical leaps forward.'”

But for the final film of this trilogy, “Star Wars: The Rise of Skywalker,” Lucas had a bit more of an input. In an IGN interview earlier this year, Abrams, who returned to write and direct after original director Colin Trevorrow left the project, said that he spoke with Lucas during the screenwriting process to get his guidance.

“This movie had a very, very specific challenge, which was to take eight films and give an ending to three trilogies, and so we had to look at, what is the bigger story? We had conversations amongst ourselves, we met with George Lucas before writing the script,” Abrams said.

“These were things that were in real, not debate, but looking at the vastness of the story and trying to figure out, what is the way to conclude this? But it has to work on its own as a movie, it has to be its own thing, it has to be surprising and funny and you have to understand it.”

Bob Iger’s “The Ride of a Lifetime” is available now from Random House, and “Star Wars: The Rise of Skywalker” will hit theaters on Dec. 20.