Disney's answer to Comic-Con got off to an unexpectedly tardy start on Thursday morning -- due, president and CEO Bob Iger said, to a larger than expected crowd, although the extensive security check might also have had something to do with it. 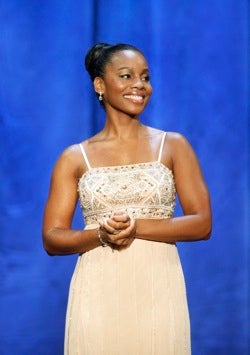 Once D23 Expo officially got underway at the Anaheim Convention Center, fans were treated to a 30 minute preview of "The Princess and the Frog," followed by a song by the animated movie's lead vocal talent, Anika Noni Rose.

The Disney faithful ate it up.

Iger spoke fondly of sitting more closely to the TV than his mom would have liked, watching "Davy Crockett" with his coonskin cap.

"Annette was cute, but she had nothing on Davy for me," Iger said.

The exec said Disney decided to create the event after touring the studio archives. "We thought, 'why not share it with you?' he said. After all, he added, who would appreciate it more?

The event, named for 1923, the year Walt Disney founded the company, drew thousands opening day. The company would not give out attendance figures, but expo head Steven Clark said they expected “tens of thousands” over the four-day period.

Judging by first day crowds, D23 drew heavily on animation fans. Any mention of the company’s founder drew heavy cheers. So, for that matter, did Iger’s invocation of the Marvel deal, unveiled last week.

The exec praised Marvel’s storytelling, creativity and presentation. With both companies working together, "the possibilities are endless," he said.

Speaking with the press later, he said there would be some integration of the two companies but “we’re not planning any Disnification of Marvel.”

He said the company plans to treat it much the way it did Pixar after its acquisition, respecting its creative culture, while extending the Marvel brand further.

“When you look at it in terms of Walt Disney, you can see applications for it virtually everything the company does,” Iger said.

Iger said that the company is considering bringing “Captain EO” back, and recently screening the Michael Jackson 3-D short with that in mind.

However, it was made long enough ago that the technology seems simplistic, he said. “It’s one of those things, if we bring it back it would get a lot of attention, so we want to do it right,” he said.

The company bestowed its annual Disney Legends Awards after Iger’s presentation. Usually, the ceremony takes place on Disney grounds, but the studio made an exception for the inaugural D23. Betty White, the lone “Golden Girls” star there to accept her award, promptly brought down the house.

“First of all, I want to put the rumor to rest that somebody started, that I used to baby-sit for Walt when he was a little boy,” she joked, before talking about a Mickey Mouse doll she got when she was young and has to this day.

Marveling at the fact she continues to work for the studio – most recently in “The Proposal”—she quipped, “They haven’t caught on to me yet.”

Robin Williams, who got his big break on ABC series “Mork & Mindy,” brought his usual hyperkinetic energy to the proceedings, greeting the assembled, “Good Morning, Anaheim.”

He then riffed about the characters Disney could have at a Shanghai themepark, in the early planning stages.

“After heart surgery, it’s great to be alive,” he said.

Donny Osmond also showed off his footwork as a preview of his stint on “Dancing With the Stars.”

The fans were appreciative, though smaller in number than at the earlier morning sessions.

Out on the show floor, fans lined up for photos and perused booths full of collectibles. By late afternoon traffic had picked up considerably from the morning. However, the show did not fill the entire Anaheim convention center, so there’s certainly room for it to grow.

But it won’t necessarily be an annual event there. Iger said the studio was already looking at other types of fan shows, possibly targeting kids or in other locations.

“It’s pretty safe for us to conclude this is going to be, and has already been, a success,” he said, minutes after showing off his vintage Mickey Mouse watch, purchased for $1100 after Disney bought ABC in 1995.

It certainly played to the Disney faithful, who could even check out model Disney home decor.