Bernie Sanders says The Walt Disney Company underpays and exploits its employees. CEO Bob Iger shot back that Disney is a massive economic force in the U.S., pointedly asking Sanders: “How many jobs have you created?”

So, who is right?

The answer, not unlike American politics or running a global entertainment company, isn’t so simple.

Also Read: Disney's Bob Iger Blasts Bernie Sanders on Private Facebook Post: 'What Have You Contributed to the US Economy?' (Exclusive)

“I’m not sure why Bernie decided to take Disney to task, we have quite a number of large employers that do rely heavily on low-or-minimum-wage employees for a big part of their business,” Dr. Robert Kleinhenz, an economist and director of research at California-based Beacon Economics, told TheWrap.

In California alone, Disney’s Orange County operation has surpassed UC Irvine as the area’s largest employer providing 23,000 jobs, the Orange County Register reports. (Disney did not respond to requests for comment on its employment numbers.)

At Disney World Park and Resort, up to 70,000 residents of Central Florida are employed by Disney, according to the Orlando Sentinel’s Sandra Pedicini, who covers Florida theme parks Disney, Universal and SeaWorld. Several groups of employees, including performers who impersonate the famous characters from Disney films to food service workers, are represented by local unions.

“[Disney’s] got a huge payroll … in that sense one should be pleased that it’s large and employs people in a wide array of pay scale, with talents ranging from business acumen to those who walk down Main Street Disney and have to pick up trash,” Kleinhenz said.

But Sanders, addressing a rally in Anaheim on Tuesday, spoke to the quality of those wages. In both Florida and California, Disney will escalate its minimum wage to state requirements of $10 and $10.50, respectively, by 2017. But Sanders decried the amount after the record-breaking $2.8 billion first-quarter profits the company posted this year, largely due to the success of “Star Wars: The Force Awakens.”

Sanders, whose campaign hinges on his criticism of the 1 percent, also referenced a lawsuit brought last year by 250 Disney employees, some of whom were forced to help their outsourced replacements transition into their own jobs before they were let go.

As TheWrap exclusively reported Wednesday, a defiant Iger lashed out at Sanders in a private Facebook post.

“To Bernie Sanders,” he wrote, “we created 11,000 new jobs at Disneyland in the past decade, and our company has created 18,000 in the US in the last five years. How many jobs have you created? What have you contributed to the US economy?”

In a statement to TheWrap, a company spokesperson said that Sanders “doesn’t have his facts right. The Disneyland Resort generates more than $5.7 billion annually for the local economy, and as the area’s largest employer has added more than 11,000 jobs over the last decade, a 65 percent increase.”

Those numbers did not include a forthcoming Florida park addition, themed entirely around the “Star Wars” franchise.

“There’s this broader dialogue about the distribution of income, and Bernie is not the only person who is concerned. That’s not going to be solved by Disney, or by electing Bernie Sanders,” Kleinhenz said.

Meeting just the minimum as a deep-pocketed company does not appease Sanders and like minded people — but Disney employees tell Glassdoor they are generally satisfied. 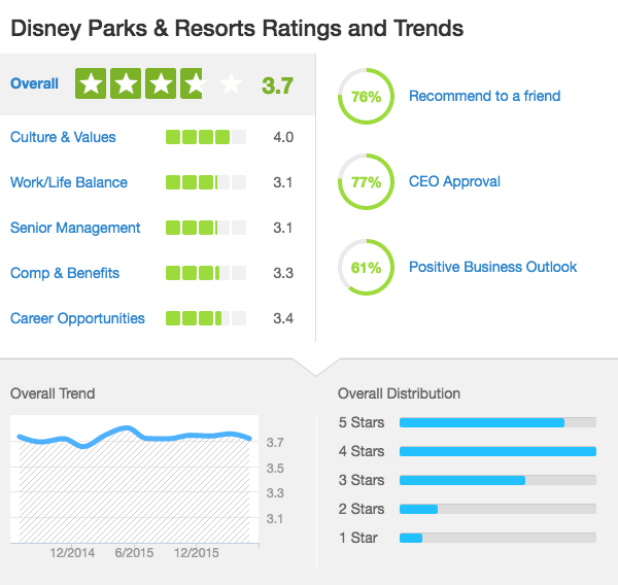 “Disney Parks & Resorts employees rate the company, with a 3.7 company rating overall (on a scale from 1-5). This is higher than our site average of a 3.3 company rating,” a Glassdoor spokesperson told TheWrap via email.

“It looks like employees also rate the company highly for culture and values, but slightly lower for work-life balance, senior management, comp and benefits and career opportunities.”

In any event, tangling with the monolithic Disney got Sanders plenty of ink.

“It raises his profile and gets a lot of headline attention,” Kleinhenz concluded. “But he’s making some good points about some challenges that we have in our economy and our society.”

Rasha Ali contributed to this story.