A memorial special for Bob Saget is coming to Netflix this Summer, according to one of his oldest friends.

Shortly after Saget’s death, a slew of his famous friends and co-stars came together at the The Comedy Store in West Hollywood to pay tribute to the actor and comic. The night saw performances from people like Jim Carrey, John Stamos, Chris Rock, John Mayer and more. During an appearance on “Dystopia Tonight with John Poveromo,” Saget’s longtime friend Mike Binder revealed that he actually filmed the show, and it’s now set to release on Netflix in June.

“It was a magical night,” Binder told the podcast. “And we filmed it. And I showed it to Netflix. I said ‘Look at this! Just look at 16 minutes of this.’ And Robbie Craw, the head of comedy at Netflix, he just said ‘This is remarkable.’ And they bought it as a special.” 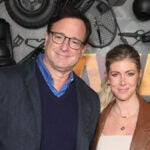 Binder did not reveal a specific release date, but narrowed it down to the first week of June. Binder noted that the special will be screened live during the “Netflix Is a Joke” comedy festival in May, then released on the streamer later.

Netflix did not immediately respond to TheWrap’s request for comment on the show.

“It’s just an amazing special,” Binder added. “Music — Jackson Brown and John Mayer play this song, a version of ‘These Days’ together that’s just beautiful. And then everybody gets up and sings ‘A Dog Licked My Balls’ which was Bob’s closing song.”