Bobbi Kristina Brown’s aunt Leolah Brown dropped a bombshell claim on Sunday, claiming that the ill-fated daughter of Whitney Houston and Bobby Brown was “doing fine” before her death in July at age 22.

Leolah Brown went on to claim in a passionate Facebook post that Pat Houston and others “did everything they could to literally see to it that Bobbi Kristina was completely gone!”

She also asserted that Bobbi Kristina Brown wanted Pat Houston “to stay far away from her.”

Referring to Pat Houston as Pat Garland, Brown wrote, “Pat Garland and others (I won’t mention here) did everything they could to literally see to it that Bobbi Kristina was completely gone! I said this before and I will say it again. Bobbi Kristina was doing fine! She was communicating with us and looked forward to coming home! And in her communicating to us she wanted Pat to stay far away from her!”

Brown went on to vow, “IT AIN’T OVER” and promised her Facebook followers that they will receive the “true” story in her book, which she said would come soon. 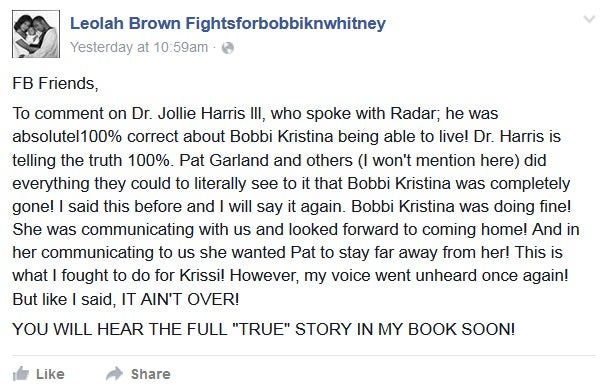 Bobbi Kristina Brown died in Georgia on July 26, 2015, six months after being found face-down and unresponsive in her bathtub. According to her grandmother Cissy Houston, Brown suffered from global irreversible brain damage.

Brown’s dislike for Pat Houston is a matter of public and vocal record. In August, the sister of Bobby Brown walked out of Bobbi Kristina’s funeral, telling reporters, “Whitney will haunt Pat Houston from the grave” and adding, “Pat, it’s not over. It has just begun.”