“On the House: A Washington Memoir” came out April 13 after quite a lot of promotion from the former Republican lawmaker. On Thursday, it topped the “Combined Print & E-Book Nonfiction” list as well as the “Hardcover Nonfiction” list.

In the combined category, Boehner’s book was followed by Patrick Radden Keefe’s look at the Sackler family, “Empire of Pain,” also new this week. Third place went to “The Code Breaker” by Walter Isaacson, which has spent six weeks on the list. 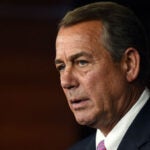 Also Read:
Boehner Says Pelosi Does a Better Job ‘Holding Her Party Together’ Than He Did as House Speaker (Video)

“On the House” generated a lot of hype before and after publication. During a recording of the audiobook, Boehner mused that GOP Sen. Ted Cruz should “go f—” himself.

Cruz’s subsequently polled donors on how he should destroy his copy of “On the House” — “machine gun” the new memoir, “chainsaw it” or light cigars with it, presumably after setting it on fire.

The book had plenty of mean words about Cruz, but also trashed late Fox News founder Roger Ailes and “political terrorists” who are, in his view, destroying the Republican party and government at large.