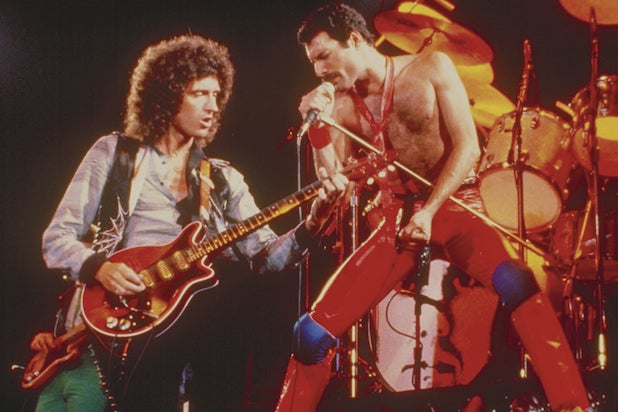 There’s no disputing that Rami Malek is terrific as Freddie Mercury in “Bohemian Rhapsody,” or that the movie itself is highly entertaining. But does it misrepresent the real story of Mercury and Queen? We put that question to screenwriter Anthony McCarten, no stranger to films based on true stories (“The Theory of Everything,” “Darkest Hour”).

How much input did the surviving members of Queen, particularly Brian May and Roger Taylor, have into the script?
ANTHONY McCARTEN I met them and recorded interviews over several days, and they were very respectful. I made the case that a film is a painting, not a photograph, and that as long as you’re faithful to the truth of what it felt like, shaping and conflation can be necessary. They’re sophisticated men, and they went on the journey with us.

I found the movie quite enjoyable, but I also cringed when you show them on their first American tour playing “Fat Bottomed Girls,” a song from their seventh album, or when you suggest that they left EMI in a dispute over “Bohemian Rhapsody.”
You have to tame history a little. History, it turns out, is a pretty lousy filmmaker. If I’ve done my job right, you are going to accept things that did not really happen. If I simply annotated history like some docudrama, then you don’t need a screenwriter — you can just transcribe it from the Wiki page. So you ask yourself, “Does it breach the ethics of storytelling to have this song played here?” No, it doesn’t — and if you don’t include the song, people will miss it.

What about the buildup to Live Aid? The movie would have us believe that the band had just come back together and were worried that they were rusty, when they’d actually finished a world tour less than two months earlier. And we see Freddie telling his bandmates he’s HIV-positive before the show, when by all reports he wasn’t diagnosed for another two years.
We don’t know that. People assume that Freddie didn’t know anything about his AIDS diagnosis, but it’s very much within the realm of possibility that he had privately done a blood test. People around him had already been diagnosed. It’s a perfect of example of people pretending to know more than the historical fact.

And the part about them being nervous came from Brian and Roger. They were nervous about it, because it was such a major gig. If they weren’t, they wouldn’t have done five days of rehearsal before the show.

When we spoke about “Darkest Hour” last year, you said that with historical movies, “you cannot do damage or injury to history.” Do you feel the same about a pop-culture movie like this?
In my mind, it’s exactly the same. But there’s not a hard red line that is obvious to everybody. The basic aim is to capture what I call emotional authenticity, and tell the span of 20 years in two hours. Sometimes that requires the exclusion of certain facts and the invention of something else. And audiences are much more sophisticated than critics give them credit for. It’s easy to point out, “Oh, that never happened,” but everybody making a movie like this is aware that any deviations from historical fact will be questioned. These are all deeply considered judgment calls made by the writer and producers and, in this case, the subjects. In the end, the movie is as truthful as we could make it.