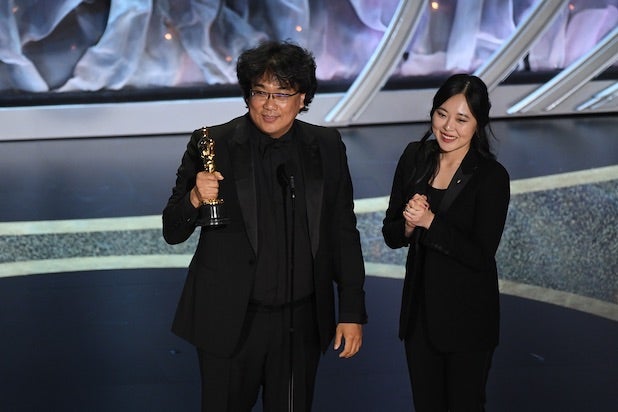 Is Bong Joon Ho’s interpreter going to make a movie about awards season?

That’s what Sharon Choi told TheWrap when we spoke to her and Bong in January — and she would certainly have a unique perspective on the whole circus.

Starting at the 2019 Cannes Film Festival but especially during the last several months of awards season, Choi has been a constant presence at the side of “Parasite” director. As his interpreter at all awards shows, interviews and public appearances, the 25-year-old Korean American has aided the Oscars’ biggest winner as he charmed voters, audiences and press on the way to four Oscar wins for “Parasite,” including Best Picture and Best Director.

(While Bong can hold a conversation in English, he prefers to use Choi during all public appearances and interviews.)

Choi currently lives in Seoul, according to the Evening Standard in the UK, and is an aspiring filmmaker herself. In the pressroom at the Oscars, Bong pointed out that Choi “studied film in the university,” and added that she was working on a feature script. “I am so curious about it,” he said.

When I spoke to Bong after his Oscar nominations, I ended the conversation by asking Choi what she was going to do once awards season ended. While she looked embarrassed to be asked about herself, Bong immediately volunteered, “She’s a director, too!”

“I do want to direct,” Choi admitted. I asked what kind of movie she wanted to make, and she grinned.

“I want to make a movie about this,” she said. “About awards season!”

After the Oscars, we reached out to Choi to see if the script that Bong referred to was indeed her awards-season script, but did not receive a response. (“She has received a TON of press requests,” according to one person close to the “Parasite” campaign.)

But after the Golden Globes, Critics’ Choice Awards, SAG Awards, Directors Guild Awards, BAFTA, the Oscars and everything in between, we know Choi has lots of material to work with.

And now, maybe, she might finally have some free time to work on it.