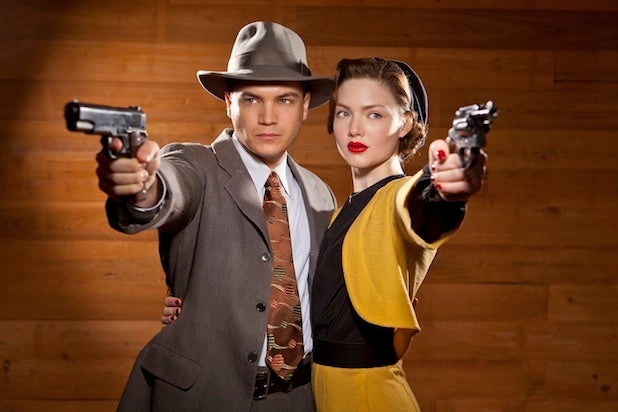 Lifetime’s “Bonnie & Clyde,” which will also air on A&E and History channel, tackles the lives and demise of the iconic criminal couple with a new spin.

In the miniseries, Bonnie Parker (Holliday Grainger) takes a more active role than she had in previous portrayals of her and boyfriend Clyde Barrow’s (Emile Hirsch) crime spree.

“Our main mantra was if we’re going to do ‘Bonnie & Clyde,’ we’re going to make sure that it’s a Bonnie and Clyde both us and the audience had not seen before,” co-writer John Rice told TheWrap. “We were looking for a spark of something that was both true and obscure, which is what we drew the characters from.”

In the two-part miniseries, viewers will meet Clyde as his crimes escalate after serving time in prison and meeting Bonnie. With a failed marriage behind her, Bonnie is an aspiring entertainer who’s finding it difficult to break into the industry before discovering Clyde could be her ticket to fame. Together, they go on a crime spree that captures America’s fascination in the 1930s.

TheWrap: What made you decide to portray Bonnie as the driving force of the couple?
John Rice: We found out that Bonnie had an interest in getting attention, from singing a honky-tonk song at her father’s funeral to sending her headshots to Hollywood. And at the time, Pretty Boy Floyd was in the newsreels and the True Crime magazines. So, what if rising up as an outlaw couple kind of occurred to Bonnie in stages as she kind of drives the wheel of where they’re going to go, because she’s kind of the first reality star?

For Clyde, you took the interpretation that he was motivated by revenge against the government for what he went through in prison.
Joe Batteer: For a kind of global perspective on that, he came from a family that lived under a viaduct to just the times of the depression and how do I find a way for myself? Then, getting thrown in prison and the experiences there. One thing was he wasn’t going to go to prison again after what happened there the first time.

JR: One specific thing was that a lot of people believe that the first man he killed was in that prison and it was the man that sexually assaulted him. So, it was a huge part of Clyde Barrow’s life. He robbed some hardware stores and stole some cars and they sent him to hard time. So, we wanted to delve into that and show that it was a part of who that guy was.

Also read: Can an Adventurous ‘Steel Magnolias’ Put Lifetime in the Game?

There’s a disturbing movement, in my opinion, among TV critics and audiences in which they demand that drama be factually correct. What are your thoughts on that?
JR: My favorite movie was ‘Amadeus’ and it exposed me to Mozart by making a drama where there’s a lot of truth and there’s a lot of conceit that probably isn’t true in any way at all. But, it worked as a movie and made us aware of this man’s life. We like to say there are 57 truths in Bonnie and Clyde that people don’t know anything about. Other movies didn’t get four hours of screen time to tell all the truths. Our conceit is based on truth for both of the characters, that everything is 100 percent true is probably not true… There’s so much that we get to tell by shaping it as a drama that adheres first to a story that people want to watch as opposed to a historical retelling in a chronological order.

JB: We weren’t interested in doing a documentary. Even the best documentary isn’t actually true with a capital T. There’s opinions and points of view. Ultimately, we’re dramatists and we’re trying to tell a story. We don’t just want to write down the facts. Hell, anyone can do that. We’re interested in telling a tale, taking people on a ride and we think we did.

Once the casting was done, did you re-write anything to accommodate what Holliday and Emile brought to the parts?
JB: Both Emile and Holliday were great choices and I can’t think of anything.

JR: They made it work. One thing that John ad I marveled at was that our script was cared for so much by the producers and by [director] Bruce Beresford. It was amazing, actually. Bruce comes from a writing background and he was fighting to keep things in that we were willing to let go. So, the script, pretty much what we turned in was what got shot.

Part 1 and 2 of “Bonnie & Clyde” air Sunday and Monday at 9/8c, respectively, on A&E, Lifetime and History.