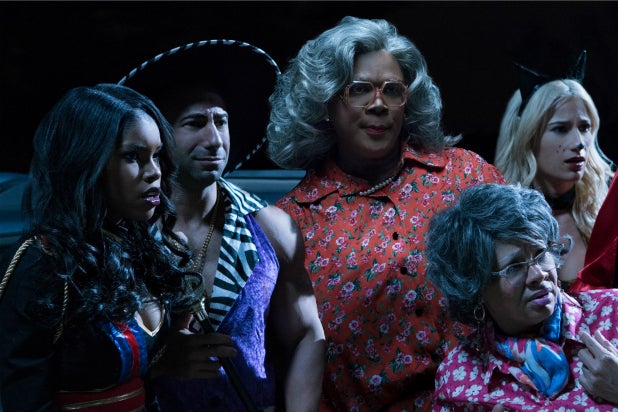 It’s hard out here for a sporadic Tyler Perry apologist. Yes, his funniest films are his dramas, where he gives the leading ladies of “Temptation” or “For Colored Girls” HIV for skipping church or whatever, but his Madea still hasn’t gotten her due as a genuinely outrageous comic creation. When Perry-as-Madea is firing on all cylinders — as in “Madea’s Big Happy Family” or “Boo! A Madea Halloween” — the character’s comedic energy is enough to raise the boats of Perry’s sluggish direction.

The success of last year’s “Boo!” has given Perry 12 months to crank out a sequel, and even by his own iffy standards, “Tyler Perry’s Boo 2! A Madea Halloween” feels rushed and thrown together. Imagine an improv class where students sit in clusters, waiting for something funny to be said or to transpire, and you’ll have an idea of how this haphazard mess plays out.

Bratty teen Tiffany (Disney alum Diamond White) has turned 18, and apparently she’s learned nothing from the events of the previous “Boo!” because she’s still talking back to her doormat dad Brian (Perry) and hell-bent on hooking up with the partying frat boys from the first movie. Given a car by her mom over Brian’s objections, Tiffany and her pals take off for Lake Derrick, the site of multiple child murders and also the fraternity’s chosen location for this year’s Halloween bash.

Brian and fellow dad Victor (UFC fighter Tito Ortiz) take off in pursuit, as do a quartet of seniors featured in most Perry comedies: Madea (Perry), Brian’s father Joe (Perry), Bam (Cassi Davis) and Hattie (Patrice Lovely). The kids, meanwhile, find themselves facing a greatest-hits posse of horror-movie creeps, from drowned girls with long stringy hair in their faces to chainsaw-wielding psychos.

Watch Video: Tyler Perry Will Give $250,000 of His $1 Million Hurricane Harvey Donation to Joel Osteen

It’s already a general rule that Madea movies are never all that funny whenever Madea isn’t on screen, but even when she and Joe are at the center of the action, they’re batting about .250 when it comes to punchlines. When they do occasionally land a laugh, it occurs in a scene that inevitably runs too long, draining the energy out of the joke and the air out of the movie. (The usually reliable Davis and Lovely aren’t given much to say or do this time around.)

It certainly doesn’t help that the film’s PG-13 rating apparently involved some clumsy post-production dubbing, where it become obvious that “bullcrap” isn’t the word that came out of Perry’s mouth on set. These clumsy dubs occur throughout, turning “Boo! 2” into the in-flight version of itself.

So much of what’s on screen feels awkward and clunky: at the party, a group of rappers entertain the crowd, but they hold their mics in a way that we never see their mouths move, so that any song can be laid over them. The one Perry eventually picks has fewer vocalists than we see onstage, giving the whole sequence a tossed-off “Sharknado” vibe.

Even the usual Tyler Perry moral lessons feel thrown in at the last minute: Gabriella turns down a cocktail with, “I don’t drink, I’m a CHRISTIAN!” and later on Victor asserts that all the college students had drugs on them, even there’s been no indication of this at any point in the story. And in true Perry form, the movie ends with several women admitting they were wrong and promising the patriarch they’ll do better in the future – unless the box office demands a “Boo 3!,” and that’s a prospect far scarier than anything in this movie.