Just when you thought you had gotten the last of the Tatooine sand out of your carpet, we’re back for “The Book of Boba Fett,” chapter two. The second episode of the Disney+ “Star Wars” series, titled “The Tribes of Tatooine,” inches the present day story forward while spending even more time exploring the mysterious bounty hunter’s past following his escape from the Sarlacc (in admittedly rousing fashion). We got some answers, we got some questions, and we got a whole lot of weird Tusken Raider noises. And probably the first drug freak-out scene in a “Star Wars” story? Let’s dive in!

Malice in the Palace

The episode opens with Fennec (Ming-Na Wen) walking one of the ninja assassins back to Jabba’s palace. Boba (Temuera Morrison) asks who sent him. The droid 8D8 (voiced by Matt Berry), who is supposed to be a torture droid but has served as a kind of makeshift protocol droid, tells them that the ninja is an Assassin of the Night Wind. 8D8 also informs them that, due to their strict code, he’ll never divulge his employer. He fears nothing. “Perhaps he fears the rancor,” Fennec says. She pushes a button in the throne and a trap door opens up (the same one that Luke Skywalker tumbled down all those years ago).

The door to the rancor’s holding cell ominously begins to creak open. The assassin calls out that the mayor sent him. The door opens all the way. The cell is empty. Luke killed the rancor, after all.

Boba Fett and Fennec head back to Mos Espa with their captive and their two Gamorrean guards. They walk into city hall and deal with a very inept clerk and then with David Pasquesi’s majordomo for the mayor. They burst into his chambers. That’s where we meet the Trandoshan mayor (although early press materials suggested that this character and the mayor are two separate characters). He’s voiced by Robert Rodriguez and is an elaborate puppet. (Speculation was that this character was Dok Ondar from the Star Wars: Galaxy’s Edge land at the Disney theme parks.) One of the mayor’s guards kills the ninja. He claims that he didn’t send the Night Wind assassin and that he should probably go to The Sanctuary, which is the name of the cantina/casino they visited in the first episode. Boba solemnly tells the mayor that he is no longer a bounty hunter. Before they leave, the mayor asks, “Who really sent the night wind?” 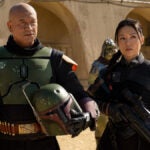 They head to the Sanctuary, where Boba Fett asks Jennifer Beals’ Garsa Fwip what is going on. She says that “The Twins” are about to arrive and might be trouble. Boba and Fennec are puzzled. They walk out into the street and see what she’s talking about – the Twins have indeed arrived and they are a pair of Hutts (Jabba’s cousins), being carried through the street to the strain of many poor alien slaves.

The Hutts claim that Jabba’s palace belongs to them; they even have a nifty holographic scroll to prove it. Boba Fett is resolute. They show that they have a warrior that can potentially best Boba Fett in combat, a very cool-looking gladiator Wookiee. Boba Fett doesn’t seem particularly scared. (Also, by the way the two Hutts are situated on that platform, um, it looks like they might be kissin’ cousins.) The Hutts seem to accept Boba Fett at his word, for now. Fennec jokes that “we’d have to get permission if we want to kill them.” Fett shrugs it off, suggests that maybe it’s over for good. That is doubtful. And honestly if we don’t see that scary Wookiee rip the arms off of somebody by the end of the season, it will feel like we were shortchanged.

Honestly, this scene had a lot of visual razzle dazzle. Just seeing more members of the Hutt family has its own kind of kinetic charge (the last time we saw a member of the notorious crime family was the younger version of Jabba in “Star Wars: Episode I – The Phantom Menace”). There’s a certain kind of awe in their grotesquerie. And a warrior Wookiee is just very cool; like much of “The Book of Boba Fett,” seeing a Wookiee outfitted for gladiatorial combat serves as a new coat of paint on a familiar old car. But doesn’t that car look pretty?

Back at Jabba’s palace, Boba Fett is back in the bacta tank, having an elaborate flashback that takes up the rest of the episode. We first see Boba training with the Tusken Raiders and their weapon, known as a gaderffii or a gaff stick (that sounds much better). He’s trying to be a better warrior. “Show me,” he tells the Tusken Raider.

While they’re training, some of the other sand people are hunting a little alien creature that appears to be the same creature that you can briefly see in “Return of the Jedi” (it extends its froglike tongue and snaps up another weird beast). As they are corralling their catch, a train passes by and fires as the Tusken Raiders. It kills a Bantha and several of the villagers. They hold a funeral for the fallen sand people.

Boba Fett sees some speeders riding across the dunes. He has an idea. They can stop the train with the bikes. He asks the Tusken Raiders’ leader if he can go do something; he’ll be back in the morning, he promises. He tracks the speeders to a nearby bar. They are, unsurprisingly, complete jerks, and part of the same gang that we saw spraying graffiti on a waylaid camp. Fett shows up at the bar, forming an iconic shadow in the doorway.

Now is as good a time as any to talk about how strong the direction is in this episode. Steph Green handled directorial duties on this episode (she handled the terrific “Watchmen” episode “Little Fear of Lightning,” the one focused on Looking Glass’ origin) and she partnered with the legendary cinematographer Dean Cundey (who shot “Jurassic Park,” “Back to the Future,” and “Apollo 13”). Together, they are absolutely unstoppable. This episode has such punchy verve, but it also slows down to get more spiritual and contemplative. It’s a delicate balance and they pull it off marvelously.

Anyway, Boba Fett kicks the collective ass of the gang and makes off with one of their speeder bikes … trailed by all their other speeder bikes. When he gets back to the Tusken Raider village he says that they can “Ride them like a Bantha!” This, of course, kicks off a wacky training montage with Boba Fett teaching the Tusken Raiders how to ride on the speeders and how to equip themselves for the upcoming train operation. They finally get the hang of it. It’s on.

A big chunk of the episode is an expertly staged action sequence, with the Tusken Raiders and Boba Fett boarding (and then crashing) the runaway train that shot at them earlier. The sequence has shades of the train heist from “Solo: A Star Wars Story,” but is much more fun, both because it harkens back to its Western roots more explicitly, and because it throws in some fun flourishes like a sequence where the Tusken Raider that Boba Fett bonds with boards the train and makes his way through the train in one continuous tracking shot. (It might remind you of a similar shot from the recent Netflix western “The Harder They Fall,” which is a very cool movie that you should definitely watch if you haven’t already.)

This sequence also introduces us to our new favorite droid – the conductor droid. There are a whole bunch of amazing practical creatures in this episode (the mayor, the Wookiee warrior, the torture droid), but this guy takes the cake – the way that he punches buttons and pulls levers is really endearing and he looks cool. When things get too hairy it does the most relatably human thing of all – it jumps out of the train and scurries to safety.

Once the train is stopped, Boba Fett interrogates the passengers on the train. They are some kind of fish people in elaborate helmets. Fett tells them that they will no longer fire upon the inhabitants of the desert, and that they will pay a fee for their safe passage. He then asks if they are carrying “spice.” They make up some lie and one of the Tusken Raiders drops a box that opens up, spilling spice onto the sand. This really makes Boba Fett mad since he knows they are from “the slave mines of Kessel” (this is a shout out to “Solo: A Star Wars Story”). It’s unclear what syndicate the fish people belong to, but it’s possible they are a faction of Crimson Dawn, the mob from “Solo” that was revealed to be run by a surviving Darth Maul.

Boba Fett sends the fish fiends away, and gives us an answer to a question from last week – what those orbs with the water inside of them are called. Turns out that they are called “black melons.” What are the odds that they’ll be sold in the Disney theme parks by the end of the week?

When Boba Fett and the surviving Tusken Raiders return to camp, he’s brought inside a tent and told that there are some tribes of Tusken Raiders that “survived by killing.” (This answers another question from last week – do all Tusken Raiders kill? – and makes it very clear that these Tusken Raiders aren’t part of the same tribe that killed Anakin Skywalker’s mother, sending him along the path of the dark side that ended with him becoming Darth Vader.) The elder Tusken Raider gives Boba Fett a gift – a small lizard that jumps in his nose and into his brain. “He will guide you from inside your head,” the Tusken Raider tells him.

Fett stumbles outside and then has a full-on psychedelic experience, first imagining himself back on Kamino, watching his father zoom away on the spaceship formerly known as the Slave 1, then watching as the sands of Tatooine become the crashing waves of Kamino. He walks until he sees a gnarled tree; the glowing eyes of Jawas (symbolizing his literal dressing down) peer down at him. He grabs a branch from the tree.

The next day Fett is seen returning to the Tusken Raider camp. He’s holding the branch from the tree. When he gets back the lizard leaps out of his nose and Fett admits that he thought he hallucinated that too. One of the Tusken Raiders asks to see the branch. Fett is outfitted in traditional Tusken Raider garb (like the kind we saw him wearing in the second season of “The Mandalorian”) Fett takes the branch to a special shed and they begin to turn the branch into a gaff stick. Finally, there is a ceremony by the campfire. The Tusken Raiders conduct a ceremony; eventually they are all moving in unison, Boba Fett included. He has gone from a desert refugee to an integral part of a society. For a character always defined as a stoic loner, he has found his tribe. For now. 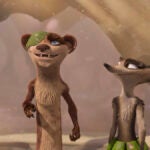