Spoilers for “The Book of Boba Fett” Episode 7 follow below.

The finale episode of “The Book of Boba Fett” wrapped up a number of dangling threads from the series, and provided an action-packed conclusion that saw Boba Fett (Temuera Morrison) teaming up with The Mandalorian (Pedro Pascal) and even Grogu (aka Baby Yoda) joining in on the fight. The series culminated in a showdown with “Star Wars” villain Cad Bane, who was finally vanquished by Boba Fett after wreaking havoc on this little pocket of the galaxy and killing Cobb Vanth (Timothy Olyphant). Or so it seemed…

Those who stuck around through the credits of “The Book of Boba Fett” Episode 7 were treated to a mid-credits scene that revealed a character healing in the bacta tank that Boba Fett had been using all season, being attended to by the same mod artist (played by Stephen “Thundercat” Bruner) who brought Fennec Shand (Ming-Na Wen) back to life. 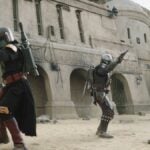 So who’s in the bacta tank? It’s a little hard to make out, but it’s Cobb Vanth. Yes indeed, the marshal of Freetown is very much alive. Olyphant’s character made his “Star Wars” debut in “The Mandalorian” Season 2, and he made an immediate impact. So it’s no surprise he was brought back for “The Book of Boba Fett,” although Cad Bane bragged about killing Vanth in the finale episode.

But it appears that just as Fennec Shand was left for dead only to be revived, Cobb Vanth will make it through as well – albeit with some bionic upgrades. This no doubt means we haven’t seen the last of Olyphant’s character, although where he’ll pop up next is anyone’s guess. He could return in “The Mandalorian” Season 3 (which doesn’t yet have a release date), or he could pop up in any number of upcoming “Star Wars” Disney+ shows – there’s “Ahsoka” starring Rosario Dawson that’s due to start production this year, and a new original series called “The Acolyte” set to star Amandla Stenberg.

And that’s not to mention the upcoming “Star Wars” shows that take place quite a bit before or after this timeline – Ewan McGregor returns in “Obi-Wan Kenobi” set for release in May, which takes place about 18 years before “Book of Boba Fett,” and Diego Luna reprises his “Rogue One” role in “Andor” also set for release this year, which is set at least 9 years before “Boba Fett.” 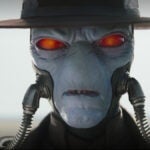 Also Read:
Who Is Cad Bane? Explaining the Blue Meanie From ‘The Book of Boba Fett’