It’s been more than a decade since bar bouncer Troy Duffy became an overnight sensation in Hollywood.  His script about a couple of hard-core Catholic vigilantes, “Boondock Saints,” sparked a bidding war that ended with Harvey Weinstein buying Duffy the bar where the young writer worked. A lot happened after that: Harvey walked away. The movie lost its heat. The bar shut down. But against the odds, “Boondock Saints” became a cult hit, and now Duffy – older and wiser – is back with “Boondock Saints II,” featuring the very same cast and more than a whiff of his old rebel attitude. Duffy got grilled by Sharon Waxman, who has known him from the start of his journey.

Troy Duffy, where the hell have you been?

I’ve been going through a five-year, debilitating lawsuit in which the sequel rights were tied up. We sued the company that made it, the bank that made the loan and several distributors. 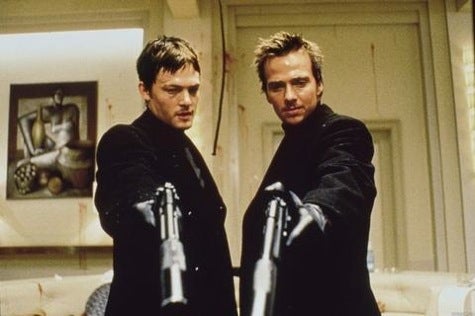 "Boondock" was obviously making a lot of money, and none of it was being paid to myself or the producers or anyone else involved.

The film only cost $6 million. It’s grossed probably over $60 millon in North America. It’s basically been a financial juggernaut from day one. So we sued the bastards. But all I’m allowed to tell you is everyone we sued settled out of court for undisclosed amounts.

The sequel rights were tied up in the lawsuits?

Yes. It was our impression that we had the rights. We sued Spartan, New City Releasing and several others. Spartan was the big one.

Who is Spartan? Ashit Shah. His first name is Ashit. Which is actually spelled a-shit. Not kidding.

I’m glad it worked out. Did you make any real money?

Everyone settled for an undisclosed amount.

Well, have you bought a house?

I have bought a house in the Hollywood Hills. I have a sweet property. I have my wife. Two dogs.

Wait, you have a wife?

I met the right gal. Angela. At my very worst moment – I blew all my dough, I was living on my buddy’s floor. I met Ang, fell in love. We opened a website, sold "Boondock" merchandising rights.

T-shirts, hats, buttons, stickers, pins. You can go on boondockstore.com. 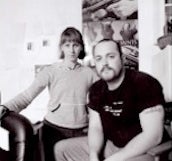 Yeah. The fans of "Boondock Saints" have put a roof over my head and food in my mouth for the last 10 years. It’s been our sole source of income.

That’s making lemonade out of lemons.

That’s making chicken salad out of chicken s—.  Then we turned around and made some real money by selling to Hotpicks stores – 600 around the country. So I was able to hire better lawyers. And every cent we made was shoveled into the lawsuit.

So tell us about "Boondock Saints II."  Did you get much of the original cast? We got them all back. Norm Reedus. Billy Connelly. Willem Dafoe’s in it. I’ve been lying to people for the last year about that. It’s been the surprise of the movie — some a–hole twittered it the other day. At the end of the movie – Willem makes a cameo. And we’ve got Julie Benz from "Dexter." Peter Fonda. Judd Nelson.

You got these people because they were fans of the movie? Pretty much. They were all fans.

So it’s 10 years later. Are you as angry about things in society as you were with "Boondock I"? Yes. I don’t believe that changes. Any person who sees a 6-year-old girl raped and killled believes that that person should die. We all have that initial thought. This is something that "Boondock" has tapped into. It’s just a fantasy. This time we’ve gone further with the humor and campiness.

But you’re in favor of vigilantism? Not really. I made you like the brothers before they do these controversial things. Some people may think they’re chosen by God to do this. Other people will think they’re just the luckiest brothers on the face of the planet.

So it's more mayhem committed in the name of God?  A priest is murdered in a church in Boston and the body is rigged ritualistically to look like the Saints did it. So it’s obviously someone trying to lure them out of hiding. Or maybe it’s God pulling them out of retirement.

$8 million. But the exchange rate was [better] in Canada.

Who put up the money?

It was done through a negative pick-up. You leverage the project for a bank loan, and hopefully it gets covered.

This all must be pretty exciting.

I’m guessing you learned a lot through this.

Most of the stuff I learned was on the business side.

How far I’ve come. How far this title has come. I don’t think you can set out to make a cult classic and do it.  It’s a movie Hollywood didn’t understand and the public did.

Going through it sucks. We didn’t get the red carpet and flashing cameras – that means you’re a f—ing failure. But kids found it, and it spread like that. It taught me that all you have to do is make a good movie.

Has the experience been humbling?

Sure. I’ve changed a bit.. But I haven’t changed that much. It was a long freaking struggle. I went to the Harvard College of filmmaking. At the end of the day, I’m glad it happened this way.