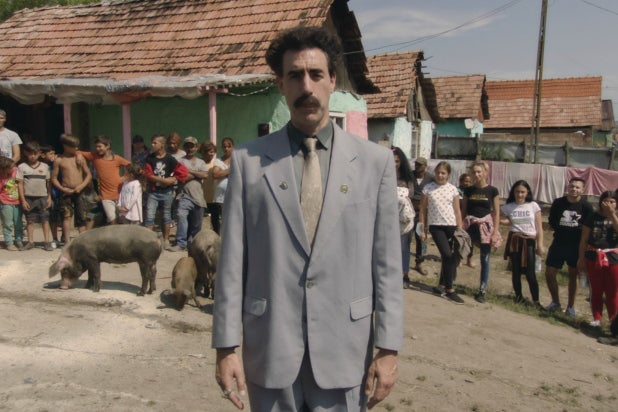 Sacha Baron Cohen’s “Borat: Subsequent Moviefilm” was slammed by the Kazakh American Association for what it says promotes “racism, cultural appropriation and xenophobia” and is a harmful representation of the nation of Kazakhstan as portrayed by a white actor.

In a letter sent to Amazon’s Jay Carney, Drew Herdener and Sarah Gavin on October 20, the group criticized the original “Borat” film from 2006 and called on Amazon to cancel the release of the sequel, which debuted to Prime Video subscribers on Oct. 23. The letter was signed by Gaukhar Noortas, founder and CEO of the Hollywood Film Academy, and Ayauly Akylkhan, chair of the board of the Kazakh American Association.

“Considering today’s socially aware political climate, why is a racist film which openly berates, bullies and traumatizes a nation comprised of people of color an acceptable form of entertainment that meets Amazon’s ethical values?” the letter reads. “Why is our small nation fair game for public ridicule?”

The letter says that although it recognizes the film is a satire, Baron Cohen chose the actual nation of Kazakhstan for his character rather than pick a fictionalized nation as he did in his film “The Dictator.” It goes on to say that following the release of the first “Borat,” Kazakh children experienced bullying due to the many people who do not recognize Baron Cohen’s work as satire and believe the film is an authentic depiction of Kazakhstan and its culture. As a result, it says that the films can “incite violence against a highly vulnerable and underrepresented minority ethnic group.”

“In this film, a white person adorns a Kazakh persona and then culturally appropriates and belittles everything we stand for. We, Kazakhs, are a small nation, but it does not mean that we are allowed to be targets for racism,” it continues. “Mr. Cohen [sic] chose to openly bully, humiliate and dehumanize an actual nation.”

“This is a comedy, and the Kazakhstan in the film has nothing to do with the real country,” Baron Cohen said in a statement. “I chose Kazakhstan because it was a place that almost nobody in the U.S. knew anything about, which allowed us to create a wild, comedic, fake world. The real Kazakhstan is a beautiful country with a modern, proud society — the opposite of Borat’s version.”

Amazon did not immediately reply to a request for comment.

Also Read: Sacha Baron Cohen Pushes Back on Giuliani Over 'Borat' Sequel Appearance: 'He Did What He Did'

“Borat Subsequent Moviefilm” is set in Kazakhstan but was filmed in Romania, and the language spoken by the main characters, including Borat and his daughter Tutar (Bulgarian actress Maria Bakalova), is a mix of Hebrew, Polish and Bulgarian.

The first film was banned in Kazakhstan upon its release, but the Kazakh government has not issued any specific statement about “Borat Subsequent Moviefilm,” and a recent tourism ad for the country incorporates one of Borat’s catch phrases, “Very nice!”

And yet over 110,000 individuals have signed a petition calling for the film to be canceled, accusing it of “racism and xenophobia,” all as individuals on social media have used the hashtag #CancelBorat.

Read the full letter from the Kazakh American Association here.