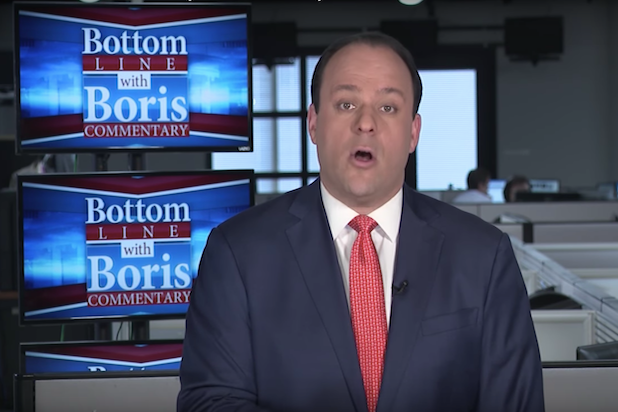 In a bid to focus less on politics and more on investigative journalism, Sinclair Broadcasting Group dropped chief political analyst Boris Epshteyn, according to a Wednesday report from NBC News. Epshteyn previously held roles in President Donald Trump’s 2016 campaign and the Trump administration.

NBC News also reports Epshteyn will be taking on “a sales-focused role with the company,” a source familiar with the matter told TheWrap.

Sinclair owns about 200 local news outlets around the country and those outlets had to treat Epshteyn’s commentary segments as “must-run” programming. In April 2018, he defended his “Bottom Line With Boris” commentary, saying, “In terms of my analysis playing during your local news, as you see, my segments are very clearly marked as commentary. The same cannot be said for cable and broadcast news hosts who inject their opinions and bias into news coverage all the time without drawing any lines between them.”

In a staff memo obtained by NBC News, Sinclair said, “We have to shine a light on our value proposition every quarter hour, in every newscast. Therefore, we will be expanding our local investigative journalism footprint in our daily newscasts. We are excited to dedicate more time in our newscasts to report on critical and relevant issues.”

To do that, the company continued, according to NBC News, it will be ending the commentary segments featuring Ameshia Cross and Epshteyn this Friday.

Sinclair and Epshteyn came under scrutiny in Nov. 2018 when the company required its stations to air a segment defending Border Patrol’s use of tear gas against migrants crossing the border on Sunday.

“The migrant crisis on our southern border has greatly escalated,” Epshteyn said in the “must-run” segment. “Dozens of migrants attacked U.S. border enforcement by throwing rocks and bottles. Ultimately, American authorities had to use tear gas to stop the attacks.”

Representatives for Sinclair Broadcasting Group did not immediately respond to TheWrap’s request for comment.